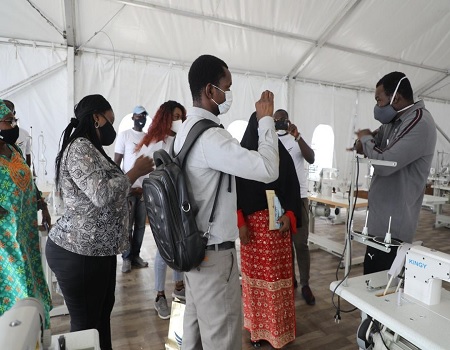 7-Star hangar, a Maintenance, Repair and Overhaul (MRO) company based in Murtala Muhammed Airport, Lagos, which recently diversified into producing nose masks has invested over N100 million into sewing machines.

Speaking shortly after an inspection visit by a team of Standard Organisations of Nigeria (SON) to the 7-Star hangar at the Murtala Mohammed Airport Ikeja, the Executive director, Engineer Isaac Balami said the 3- man team was at the hangar to ascertain the level of their compliance to the certification of the nose masks being made at the hangar.

Balami explained that the team was pleased with what they saw on the ground after their inspection and gave the company guidelines for the production of the nose masks.

Balami said the 7Star will soon start printing instructions on the usage of masks and country of production as recommended by SON while it planned to commence the production of polo T-shirts and airline crew uniforms with its over 500 sewing machines.

Balami said the company was fully prepared for the commencement of flight to meet airlines’ demand after the coronavirus pandemic shut down with the provisions of seat covers and aircraft maintenance.