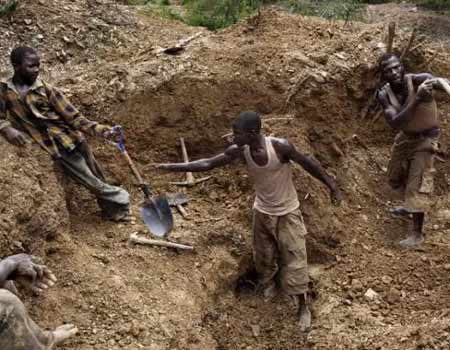 AT least seven illegal miners have been killed while a few others sustained injuries at a mining site in Jos South Local Government Area of Plateau State, after a section of the mine site collapsed.

Nigerian Tribune learnt that collapse of mining sites had been a regular occurrence in virtually all the mining sites across the state.

Relatives of victims are reportedly skeptical of reporting such incident to the law-enforcement agencies for fear of being arrested.

It was learnt that the latest incidents occurred in Waduruk village of Jos South Local Government at the weekend, when some group of illegal miners were digging massive mound of earth. It suddenly caved in and buried seven of them alive while some of those on the surface sustained injuries.

A source close to the village told the Nigerian Tribune that three of the victims were members of the same family who had been in the mining business for more than two decades, adding that the other four were hired from the neighbouring village to help them in the excavation.

“There were seven of them inside the pit digging the soil in search of the solid mineral when the earth layer above them caved in and buried all of them. Also in the same village last week, five others were trapped when the overlaying soil collapsed on them. It took the villagers several hours to dig the layer of soil that covered them. At the end of the rescue efforts, four of them were found dead,’’ the source said.

Nigerian Tribune further gathered that unspecified numbers of people had died in the course of carrying out illegal mining in the state, especially in Jos South and Barkin Ladi local governments.

When contacted, the state Police Public Relations Officer (PPRO), Terna Tyopev, said the command had not been briefed about the incident.

“I will make inquiry and get back to you,’’ he said.