4 killed in road accident in Kogi 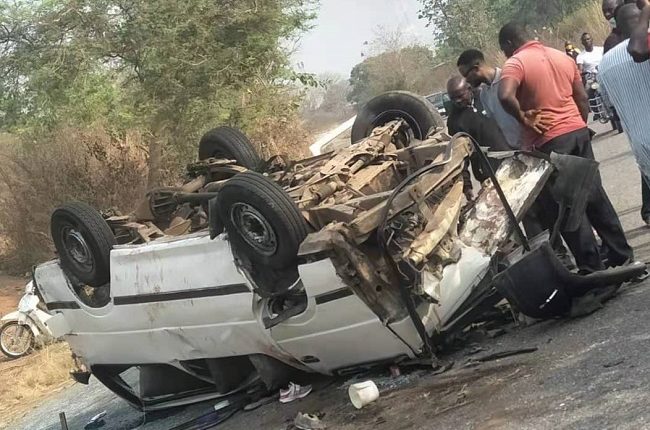 Four staff of BN ceramics company Ajaokuta have lost their lives along in Ajaokuta early hour on Wednesday.

Tribune Online reliably gathered that the accident which involved a bus and Toyota car occurred at about 9:45 am on Wednesday.

According to an eye witness account both vehicles involved in a head-on collision when the driver of the bus overtook another vehicle in a sharp bend.

The Kogi State Sector Commander of the Federal Road Safety Commission, Mr Solomon Agure while confirming the accident said three staff of the BN Ceramics company died out of nine staff in the company vehicle.

He added that the staff worked overnight and closed from work in the morning but unfortunately when their staff bus was taken them to their various residence, the vehicle involved in a head-on collision with another vehicle and three persons died on the spot.

Those that were injured were rushed to the hospital for medical treatment.

Meanwhile, the management of BN Ceramics in a statement issued on Wednesday regrets the death of some of its staff who were involved in a ghastly auto accident.

According to a statement signed by Salihu Mohammed, Human Resources Manager, on behalf of the management, said the accident took place within the steel complex this morning around 10:00 am, lamented that the BN Ceramics lost four of its staff.

“The Management condoles with the family of those who lost their lives, assuring that the management is making frantic efforts to rescue and pick up the medical bills of those injured.

“The Management calls for calm amongst the staff prayed God to grant the deceased eternal rest and their families the fortitude to bear the loss.

“The Management used the medium to call on motorists to drive safe and check their speed limit while driving within the steel complex,” the statement added.

The British Parliament at the Westminster Hall held a debate on ‘e-petition 554150, relating to Nigeria and the sanctions regime’ on Monday. The government of the United Kingdom has however responded…4 killed in road    4 killed in road

The surprise visit made on Friday night by the leaders of the ruling All Progressives Congress (APC) to former President Goodluck Jonathan at his residence in Abuja triggered a stir in the major political camps, resulting in at least four possible theories..4 killed in road  4 killed in road