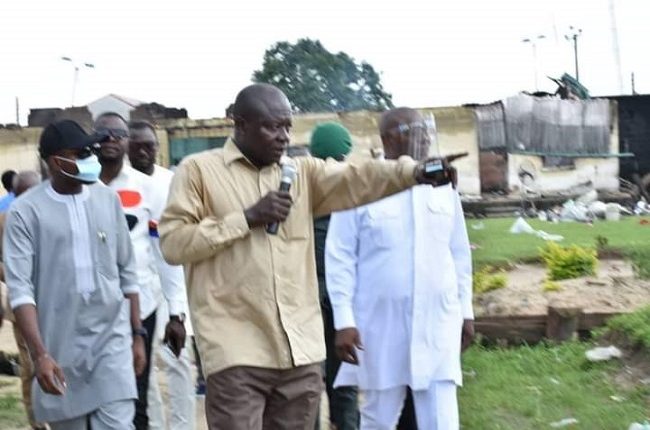 No fewer than 26 inmates escaped from the Okere-Warri centre of the Nigerian Correctional Service, during last week’s invasion by hoodlums in Delta State.

The Deputy Controller of the Correctional Centre, Mr Okonkwo Adimagbua, confirmed the incident on Tuesday during the inspection of the burnt facility by Deputy Governor of Delta State, Mr Kingsley Otuaro.

There were earlier conflicting reports on Thursday 22, October, when the incident occurred, that no inmate escaped from the facility.

But Adimagbua reiterated that 26 inmates escaped from the prison, which has more than 1007 inmates, adding that efforts are in top gear to re-arrest the escapees.

”When the hoodlums came on October 22, 2020, we thought they were #ENDSARS protesters, but before we realised what was happening, it had become full-scale destruction.

“The destruction of the facility aided the escape of 26 out of 1007 inmates in the facility before the intervention of security operatives,” he disclosed.

The deputy governor, Mr Otuaro, after touring burnt down facility, bemoaned the degree of destruction carried out by the inmates on the facility.

He wondered how such facility, which government has put in enormous resources to build, would be reduced to rubbles by the inmates.

He, however, assured that the state government would assist in rebuilding the structure, just as he commended the prison officials for their professionalism in managing the bad situation.

“We owe it a duty to protect our institutions and structures and on no circumstances should anyone take laws into their hands in destroying properties that are our collective effort and heritage,” he lamented.

Chairman of Warri South Local Government Area, Dr Michael Tidi, who joined the deputy governor during the inspection, advised the leaders to be sensitive to the yearnings of the people through favourable policy implementation to avoid crises that could lead to wanton destruction of lives and property.