Community News
By Ebenezer Adurokiya - Warri On May 14, 2017 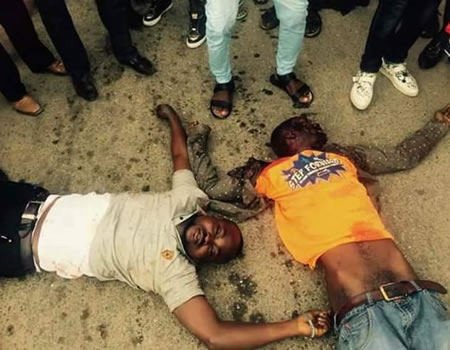 Uneasy calm still pervades the atmosphere of Ifiekporo in Warri South Local Government Area of Delta State where a naval rating manning the facility of the Warri Refinery and Petrochemical Company (WRPC) shot dead two youths during a protest on Friday.

The victims simply identified as Agbolu, from Ifiekporo community and Christopher Eghenure Igbogidi, from Ekpan in Uwvie Local Government Area were protesting with their colleagues over job slots in the company when they were shot dead by the overzealous naval rating.

The tension still mounting in the two communities of Ifiekporo and Ekpan borders on the request by the people that the identity of the trigger-happy naval rating be made known to the public and maximum action taken to redress the trend.

“This is one killing, too many. How NNPC can engage security personnel to be killing these innocent community youths like flies every time? It is just not fair,” the council chairman retorted in bewilderment.

He also assured indigenes of host communities within the command’s Area of Responsibility (AOR) of their safety both on land and on waterways.

“With respect to the incident that happened at NPDC yard at Warrior Refinery.

I wish to emphasise our readiness to protect lives and properties in our AOR.

In doing this, we will be cognisant of the need to relate cordially with our host communities.

I assure you that investigation is still ongoing on the issue,” the naval boss reassured.

However, the Itsekiri National Youth Council (INYC) has called on the Acting President Yemi Osinbajo to urgently direct the Chief of Naval Staff, Inspector General of Police and other security chiefs to call their officers and men to order.

He said that it would no longer tolerate the unprovoked extra judicial killing of innocent Itsekiri youths.

Spokesman of the apex Itsekiri youth body, Prince Stanley Oritsemolebi Emiko who hurriedly returned to Ifiekporo from the Okpekpe Marathon competition in Edo State over the killings, stated that the recurrent killing of Itsekiri youths by security personnel in Ifiekporo was barbaric, irresponsible, unprofessional and capable of causing crisis in Warri and environs.

Prince Emiko who spoke on the killings, averred that they are even more angered by the fact that agreement was already reached between Ifiekporo youths and the contractor handling the repairs at the jetty before the trigger-happy Naval rating went berserk.

He recalled similar murder of another Itsekiri youth, Omayone Dottie at the same Ifiekporo in December 2016 by an undisclosed policeman attached to the WRPC.

Emiko added that neither the NNPC nor the police authorities has exhibited any remorse till date, let alone bringing the killer-cop to justice.

Truck crushes retired police, wife, one other to death in Benue