Zoning: The Herculean task before PDP 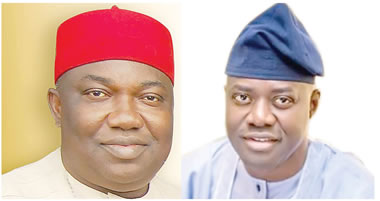 As the chairman of the 128-member National Convention Organising Committee, Governor Ahmadu Fintri of Adamawa State attempts to evolve a zoning formula for the Peoples Democratic Party (PDP) ahead of its October 31 national convention to elect new national officers, KUNLE ODEREMI looks into emerging issues agitating the minds of main stakeholders across board.

Zoning principle is among the expedient measures adopted to guarantee equity, fairness and justice among the components making up the country. According to some architects of modern Nigeria, the ethnic heterogeneity of the country makes the principle expedient to lessen or cushion mutual suspicion and friction, as well as complement the provision on Federal Character and conditions for eligibility in the constitution. Coupled with that is the dire consequences arising from the military subversion in 1966 of the federal structure in place at Independence in 1960, and substitution with a quasi-unitary arrangement.

Just as the ruling National Party of Nigeria (NPN) did in the Second Republic, the PDP took a step further towards bringing about national cohesion and deepening inclusiveness through the zoning principle from inception in 1998. A few occasions that some forces conspired to truncate the zoning arrangement left PDP almost prostrate as a result of the attendant crisis. It has always managed to wriggle out of the cul-de-sac by allowing river of justice to flow unhindered.

Four issues appear to pose a big challenge for the party in its quest to regain the power it lost to the All Progressives Congress (APC) in 2015. One is the need to put its house in order. Otherwise, that dream of forming government again could become soon fizzle out. Second is PDP adhering to the provision of its constitution on zoning and power shift, in line with current political realities in the country. Third is the need for the PDP to be seen as guaranteeing equity among the various zones making up the country in terms of power distribution.

During the outgoing week, the media was abuzz with reports of leaders of the PDP from the South-West geopolitical zone closing ranks in their quest to produce the next substantive national chairman of the PDP. Beyond the general argument that their zone had never enjoyed such right as contained in the PDP Constitution, the leaders advanced some cogent reasons for demanding a new vista.

According to reports, “The leaders of PDP in the six states in South-West have sent a strong message to the leadership of the party on the need to zone the post of national chairman to the zone in the forthcoming national convention. The South-West PDP leaders believed the chairmanship should be specifically zoned to the South-West to compensate for the 2017 situation in which it was unjustly denied the slot after the post had been zoned to it. They also mentioned that failure to zone the post of chairman to the region in 2017 led to the dwindling fortune of the PDP in the South-West as demonstrated by the 2019 election results.

“The South-West PDP leaders noted that apart from Anambra State, where a gubernatorial election will hold on November 6, the zone has two governorship polls pending in Ekiti and Osun States before the 2023 general election and having the national chairmanship slot will help seal victory in two states, thereby shoring up the chances of the party in the 2023 general elections. The South-West leaders noted that it now boasts of a united rank more than at any other time in the recent past and if given the chance, it will produce a viable, strong and popular consensus candidate capable of uniting the party and leading it to victory in 2023.”

It will be recalled that in the bid to overcome recent challenges occasioned by yet another round of leadership crisis, the main opposition party had also embarked on a series of actions meant to redirect it to the constitutional order it charted for itself from inception 23 years ago. The order is in the spirit of the 1999 Constitution on Federal Character. It states under Section 14 (3): “The composition of the Government of the Federation or any of its agencies and the conduct of its affairs shall be carried out in such a manner as to reflect the federal character of Nigeria and the need to promote national unity, and also to command national loyalty, thereby ensuring that there shall be no predominance of persons from a few states or from a few ethnic or other sectional groups in that Government or in any of its agencies.”

For the purpose of clarity, the provision in the PDP Constitution pragmatically designed to foster such spirit is enshrined under the Principles of Zoning and Article 7 (2) (c). According to the PDP Constitution 2006 as Amended, “In pursuance of the principle of equity, Justice and fairness, the party shall adhere to the policy of rotation and zoning of party and public elective offices and it shall be enforced by appropriate executive committee at all levels.” Therefore, observers note that this germane provision accounts for the spirited moves by main stakeholders in the former ruling party to practically make a tactical retreat with the primary goal of resetting the clock and restoring the path of order on inclusiveness.

And within a month or so, elders and other categories of leaders of the party, including members of its Board of Trustees (BoT), expanded national caucus, PDP Governors Forum and the National Executive Committee (NEC) have sped up the process of stabilising and restoring confidence in the party.

Aside choosing October 31 for the holding of a national convention, the leaders constituted a 44-member committee on zoning, with Governor Ifeanyi Ugwuanyi of Enugu State as chairman and Governor Seyi Makinde of Oyo State as secretary. The committee is working against the background of such information in respect t or skewed power equation at the PDP top architecture over the years. This is epitomized by the zones that have produced the national chairman. The late Chief Solomon Lar was from Plateau State; Chief Barnabas Gemade and Chief Audu Ogbeh Benue; Dr Ahmadu Ali is from Kogi. There were also Prince Vincent Ogbuluafor, Abia State; Dr Okwesilieze Nwodo (Enugu); Haliru Mohammed, Kebbi; Alhaji Kawu Baraje, Kwara; Alhaji Bamanga Tukur, Adamawa and Adamu Mu’azu, Bauchi State before Prince Uche Secondus emerged in 2017.

According to observers, the next three few weeks will be crucial in the life of PDP, having found itself battling to overcome a fresh bout of internal combustion. A whiff of litigation threw the party into a major leadership crisis, which eventually led to an interim national chairmanship. The crisis has fast-tracked the process of the party leadership setting the machinery in motion towards having a substantive national executive, thus, the coming on board of the 128-member national convention committee.

With less than two months to carry out the assignment, the committee has a great task, especially of how it will handle the principle of zoning which has become an integral identity and processes in PDP. The setting up of the Ugwuanyi ad hoc committee is a precursor to the work of the committee on convention. The former has to resolve the riddle which would assist the later in the conduct of a convention devoid of rancour and conflagration. Thus, the urgency of the work of the zoning committee is underscored by its commencement exploratory session on Thursday in Abuja.

The success or otherwise of the committee has serious implications for the party, one of which will be how it is able to come up with a mutual agreement on zoning formula to be adopted under the unfolding political dispensation, especially as regarding key national offices, notably the post of national chairman, secretary, organization secretary and national publicity secretary.

While the other positions are not considered critical, zoning of the position of chairman and secretary is  regarded as strategic. To strike a balance and achieve equity, they are zoned to different areas. Some pundits argue that a wrong judgment by the ad hoc committee and failure to recognize and respect the sensibility of a critical segment and part of the party could impact negatively on the chances of the party for the presidency.

The intention of the message, that the zone deserves to produce PDP national chairman based on equity, fairness and justice, was not lost to the stakeholders across the country.

Oni, however, was quick to respond to the inclusion of his name in the list of potential occupants of the exalted office. He is among the contenders for the governorship ticket of the party in next year’s election in Ekiti State. According to him: “The person that all of us are setting our eyes on is Prince Oyinlola, and he has not yet told us that he is not going to do it. That’s the man we all want to support for the position of national chairman,” the former Ekiti governor was quoted as saying.

As the Uwuanyi committee fine-tunes on the zoning formula to be adopted by the PDP, the promise made by all the leaders in the heat of the tempest that almost sent the party back to the precipice becomes instructive. A communiqué issued at the end of a meeting by the leaders read in part: “NEC emphasised the indivisibility of the Peoples Democratic Party (PDP); stresses the need to remain united as a party as we work assiduously towards removing the inept, indolent and corrupt APC from government, come 2023; urges members to continue to make personal sacrifices in the overall interest of the party.”  Members of the public, especially PDP faithful, according to analysts, eagerly await how those personal sacrifices will translate into pragmatic and affirmative action on the zoning principle.

Too much emphasis on prayers without hard work, creative thinking is not ideal —Bakare

How GodConnect will enhance propagation of gospel —Oyebode