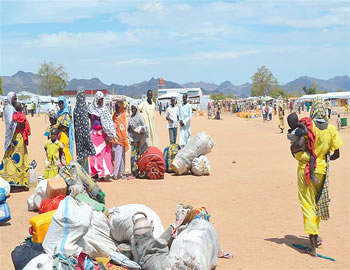 Gov. Ibrahim Geidam of Yobe on Friday said the state government has commenced the process of returning over 300,000 displaced persons to communities hitherto held by Boko Haram insurgents.

The governor, represented by his deputy, Alhaji Abubakar Aliyu, said this in Damaturu when the Chief of Army Staff, Lt.-Gen. Tukur Buratai, who paid him a courtesy visit.

He said the state government had set up various committees to facilitate the safe return of all the displaced persons to their communities.

Geidam called for the support of all relevant authorities, including the Army, to ensure that the environment was safe for the inhabitants to return.

He said the efforts of security agencies had made the areas, hitherto held by the insurgents, safe for the return of the displaced persons.

“The insurgency had displaced over 300,000 people and destroyed property in Gujba and Gulani local government areas.

“I wish to stress that the right steps have been taken with the inauguration of the committee to facilitate the return of civil authorities in areas retaken from the insurgents.

“The state government has also commenced the process of returning inhabitants to communities hitherto held by the insurgents.”

Geidam praised the contributions and sacrifice of the Nigerian Army and other sister services in containing the insurgency that ravaged parts of the north east.

He said the Nigerian Armed Forces had since independence held the country together and urged them not to relent.

“It is on record that the Nigerian Armed Forces have always been the defender of the people and will continue to do so”, the governor said.

He commiserated with the Chief of Army Staff and the families of slain officers and soldiers in the ongoing fight against Boko Haram.

Earlier, Buratai expressed appreciation for the support given to troops deployed to Yobe.

He attributed part of the successes recorded in the fight against terrorism to the cooperation of the people and support of the Yobe state government.

Buratai said he was in the state to continue his operational visit to Army units and formations.

“I am here on an operational tour of units and formations in Yobe state and the north east in general to assess troops’ performance and see to their challenges.

“The contribution of the Yobe state government to our operations in this part of the north east had been quite commendable.

“We appreciate the support of the state government, particularly the allocation of land and funds for the construction of our counter terrorism training school in Buni Yadi.

“We have also been offered land for the construction of our logistic base.

“We also intend to use the land for the construction of a Nigerian Army hospital here in the state.”

He said that it would restore socio-economic activities on the axis and lessen the burden of policing the route by the military.

The News Agency of Nigeria (NAN) reports that the Army chief was accompanied on the visit by the Commander, Operation Lafiya Dole and other senior army officers.

FG unveils plans for repatriation of IDPs from Niger Republic