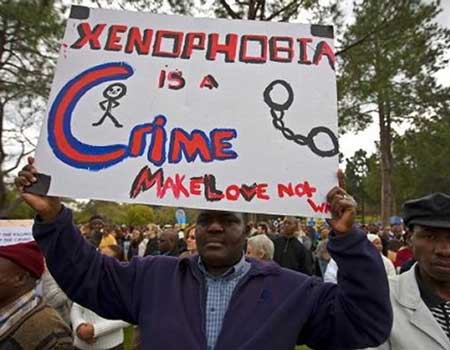 The Centre for Protection of Nigerians in the Diaspora (CPND), says many Nigerians living abroad are now in palpable fear as a result of Xenophobic attacks, especially in South Africa.

The President of CPND, Alex Orji made the assertion on Thursday during the candlelight procession in honour of the slain Nigerian Insurance chief, Mrs Elizabeth Ndubuisi-Chukwu, who was killed in a hotel in South Africa.

The News Agency of Nigeria (NAN) reports that the procession was held at the Liberty Bridge, Maryland Lagos.

Orji said that that Nigerians deserved better treatment from the South African Government away from the killings being experienced.

“The reason for these ugly incidents was because the government of South Africa refused to act on those killings.

“It has got to the level that the woman killed was just visiting South Africa, with this ugly trend; there is a need to speak out veraciously. Nigerians have been so good to their South African hosts.

“No one is allowed to take another mans life; the killers should be made to face the full wrath of the law.

“I will also implore people to always check on their people living abroad since we are now in the age of social media where contacts can be made easily,” he said.

The Presidential Candidate of the African Action Congress (AAC) during the last general election, Omoyele Sowore, who attended the candlelight procession, urged the government to constitute a strong diplomatic team to meet with the countries involved.

“Obianuju was an industrious woman killed in South Africa in spite of the fact that she was not a resident. This type of brutality has been going on too frequently and we need to address it.

“Nigerians are getting killed almost every day; we need to be protected by our government and the governments of those countries where they reside in either legally or illegally.

“Government needs to constitute strong a diplomatic committee to look into these issues of wanton killings to find a lasting solution.

“The truth is that most Nigerians are now living in palpable fear of attacks, especially in the South Africa where they are experiencing Xenophobic attacks,” he said.

Contributing, Mofe Oyatogun of Star FM, condemned the xenophobic attacks on Nigerians, adding that the killing of Ndubuisi-Chukwu should be a wake up call for the government.

“The people of South Africa have no reason for killing Nigerians, moreso, they also have their people residing in Nigeria unmolested.

“I remembered all the efforts Nigeria had to put up during the apartheid regime and how my mum fed several South Africans in our home, so is this how they want to reward us?

“Nigerians are wonderful hardworking people in spite of derogatory remarks against us in certain quarters, we deserve to be treated with respect; so we are calling for justice,” she said.

Speaking, Adetola Olubajo, the President, Nigeria Union in South Africa,said that what Nigerians are demanding is justice for the slain woman and others unjustly killed in that country.

“What we want is justice for her and nothing more. If we have been fair to the South Africans in the face of provocations, while they have their own businesses here, their government should know better.

“What we want is for those perpetrators of her murder to be brought to justice,” Olubajo said.