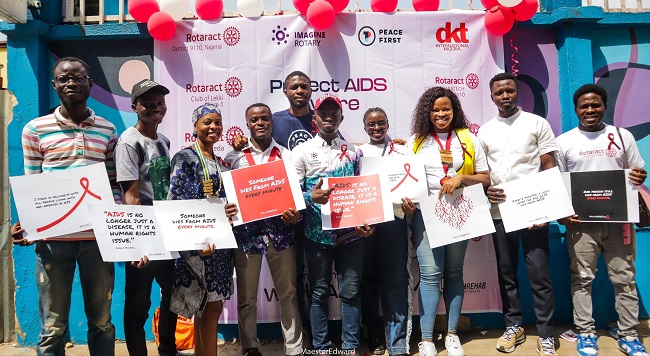 Rotaract District 9110, in partnership with Peace First and DKT International Nigeria, has called on the students of Yaba College of Technology and the neighbouring communities around the campus to regularly know their HIV status.

These non-governmental organisations (NGOs) made this call during an event they organised in commemoration of World AIDs Day 2022, designated: ‘Project AIDS Aware’.

World AIDs Day is celebrated annually every first day of December, and the theme of this year’s AIDS Day − according to the Joint United Nations Programme on HIV/AIDS (UNAIDS) – is: ‘Equalise’.

While giving the opening remarks, the Rotaract District 9110 Medical Director, Princewill Onyekah − who is also a part of the Peace First global community of young change-makers − called on the students and persons in the Yaba College community to know their HIV status, to practice safe sex, and to end the stigmatisation of persons living with HIV and AIDS.

Students of the college and members of the community came out in their numbers to witness the event, and about 1000 HIV self-testing kits were distributed alongside 400 condoms.

The beneficiaries of the kits were taught how to use them and they were also given extra kits to conduct tests for their relatives at home.

Souvenirs were given to those who received the kits so as to encourage others who were doubtful about receiving the kits.

The Rock the Ribbon campaign was also conducted, where Rotaractors and volunteers participated in raising awareness of HIV and AIDS by putting on the red ribbon to campaign for equality and the end of HIV stigmatisation.

The students and members of the community appreciated the partnering organisations for organising the events, and for sensitising them to the need to know their status.

While giving the vote of thanks, the District treasurer, Oluwafemi Bamidele, who has represented by the District Rotaract representative, Afolabi Abdullahi, said, “Let’s equalise to end AIDS.”