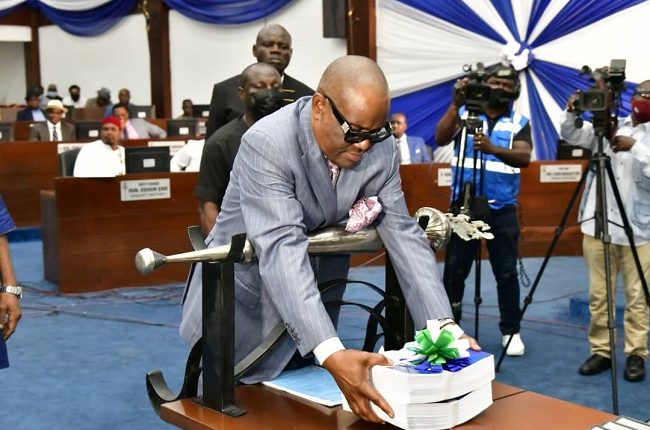 Governor of Rivers State, Nyesom Wike on Friday disclosed his plans to spend Four Hundred and Eighty-three billion, one hundred and seventy-three million, three hundred and seven thousand, ninety-six naira (N483,173, 307,096.00) only for the 2022 fiscal year.

He made this closure during the presentation of the 2022 budget of “Consolidation” to the State House of Assembly for consideration.

He said the policy thrusts for the 2022 Appropriation Bill is in furtherance of the state’s quest for greater economic growth and fiscal consolidation, enhancing jobs and wealth creation, building first-rate economic infrastructure, and achieving equity and social protection through poverty reduction and economic inclusiveness.

The governor said his administration had succeeded significantly in managing the resources of the state by building a strong economy relative to most other states of the federation.

According to him, real tangible growth figures were also posted consistently, which is in excess of 5 per cent year-in-year-out, especially for the last two years.

“Within Nigeria, our economy is not only stronger than 90 per cent of the other states; it has continued to perform better than most others in terms of real economic growth, fiscal consolidation, debt-to-Gross Domestic Product ratio and Internal Revenue Generation,” Wike stated.

He added: “The 2022 budget is crafted within the framework of the State’s Medium Term Expenditure Framework, the State’s Economic Strategy Paper, the national economic outlook and the State’s economic growth projections coupled with the various development instruments and programmes.”

The governor said that the 2022 budget is pegged on the assumptions of the crude oil benchmark of USD 50 per barrel, National crude oil production estimates of 1.7 million barrels per day; Currency exchange rate of N410 to the Dollar; Gross Domestic Product growth rate of between 3 per cent for the medium term; and an Inflation rate of 13.5 per cent.

“Although this is yet another ambitious projection given the challenges of the national economy, we believe we would be able to successfully implement the capital because it is backed by a concrete plan of action and within achievable limits.”

Governor Wike explained that over half of the capital budget estimate is targeted at the economic and social sectors.

He listed the main items of the scheduled capital spending in the 2022 budget to include Agriculture, Roads, Bridges, Healthcare, Education, Social Welfare, Justice Delivery, Sports, Youth and Women Empowerment and Human Security.

These, he said, would invariably lead to generating real economic growth, job creation, poverty reduction and improvements in the living standards of citizens.

“But none was backed by reasonable policy, investment and sustainability frameworks. Little wonder, they all readily failed and palled to nothing as ill-conceived fanciful ideas and programmes.

“We have therefore decided to make agriculture part of our engines for sustainable economic growth and development by supporting our people to move beyond subsistent levels of production.

“Our approach is to de-emphasize the direct participation of the State Government in agriculture and encourage the private sector to take the lead.

“We have provided the sum of N16.94 in the 2022 capital budget to revitalize, stimulate and grow the agricultural sector in the state.”

In the justice sector, Wike said the sum of N2,256,928,022.80 has been earmarked as additional resources to improve the efficiency of the sector.

The sum, he maintained, will fund the State Judiciary’s action plan for 2022 that includes the construction of the new Magistrate Court’s Complex in Port Harcourt, the Rivers State Judicial Institute and the South-South Zonal Headquarters of the Federal Judicial Service Commission.

He said the 2022 budget is also expected to further strengthen the health sector such that citizens are healthy with immediate access to affordable quality primary, secondary and tertiary healthcare services and support.

Reflecting on how the 2021 budget of N448.6B performed, Governor Wike said its implementation was very impressive with over eighty per cent performance.

Governor Wike urged the Supreme Court to expedite the trial of the Value Added Tax suit between the Rivers State government and the Federal Government.

“In anticipation of our victory we are continuing with our plan to integrate the VAT into our mainstream tax operations and strengthen the capacity of the RSIRS to effectively administer this head of tax when the responsibility comes.”

He said all the members of Rivers State House of Assembly know the exact projects and services that are provided by the Wike administration for the good of the state and its people.

“No one is in doubt that what you have presented before the Rivers State House of Assembly is not realisable. It is a realistic and realisable budget and this has been your established pattern for the six years going seven years that you have mounted the leadership stage in the state.”

In spite of the huge investment in the water sector by the government and international organisations, water scarcity has grown to become a perennial nightmare for residents of Abeokuta, the Ogun State capital. This report x-rays the lives and experiences of residents in getting clean, potable and affordable water amidst the surge of COVID-19 cases in the state…Wike presents N483bn  Wike presents N483bn

The Lagos-Ibadan railway was inaugurated recently for a full paid operation by the Nigerian Railway Corporation after about a year of free test-run. Our reporter joined the train to and fro Lagos from Ibadan and tells his experience in this report…Wike presents N483bn  Wike presents N483bn