Wike defends his choice of Justice Amadi as Chief Judge 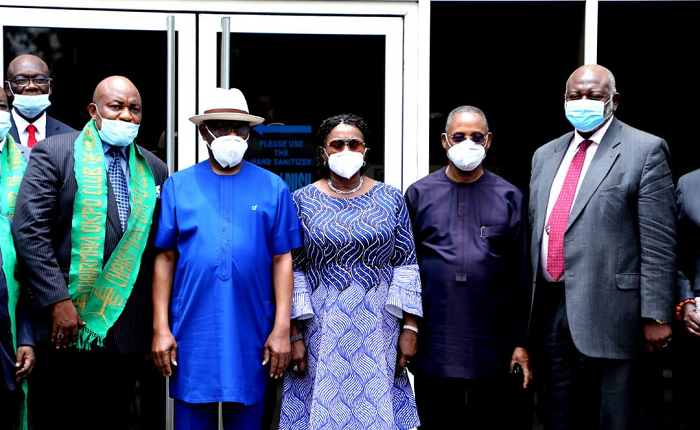 Rivers State Governor, Nyesom Wike has defended his choice of Justice Samuel Amadi as the next chief Judge of Rivers State saying he has forwarded his name to the State House of Assembly for confirmation.

Some section of the judiciary had kicked against the recommendation by the National Judicial Commission (NJC) and appointment of Justice Amadi as the Chief Judge to replace the retiring Justice Adanma Iyayi-Lamikanran saying he was not the most senior judge of the High Court in the state.

They argued that according to the tradition in the judiciary Justice Joy Akpughunum is the most senior High Court Judge in the state and should be appointed to the position.

Speaking when he received a delegation of Okpo Club of Nigeria on a courtesy visit at Government House, Port Harcourt, Wike said he would not succumb to sentiment over who becomes the next Chief Judge of the State.

He told the club that he had conveyed to the State House of Assembly the letter of recommendation from the National Judicial Commission (NJC), picking Justice Amadi for the job.

He argued that the process of appointment of a substantive Chief Judge is based on constitutionality and not sentiment.

He said, “I have conveyed the NJC’s recommendation to the House of Assembly. I am not the one who recommended, mine is to act on the recommendation of NJC. I never wrote a letter to NJC, I am not a member of the Judicial Service Commission (JSC).”

Wike said the names of the two most senior judges of the State High Court were submitted by the State Judicial Service Commission to the NJC early, in order to avoid the situation of having a Chief Judge in an acting capacity.

“Nobody can intimidate me with any kind of sentiment. I will do what is right. We knew the crisis that happened here in this state and people do not want to distinguish it. What was the crisis? JSC submitted Daisy Okocha’s name and Agumagu’s name, of course, Daisy Okocha was the most senior. But even at that, Agumagu was the President of the Customary Court of Appeal. NJC in their wisdom said no, we are going to recommend the most senior judge and recommended Daisy Okocha.

“The then Governor said no, I will not take the recommendation of NJC and went on his own to swear in Agumagu as acting Chief Judge. The Constitution is very clear. It is only the most senior that will be an acting Chief Judge and that was the crisis.

“In this case, there is nothing like acting chief Judge. I don’t want to have an acting Chief Judge. I want to do my own thing on time and we did it on time. And JSC in their wisdom submitted two people’s name and NJC recommended one and they are playing politics by saying its the Governors personal will”

The governor said NJC is constitutionally empowered to recommend who becomes a Chief Judge and stressed that it was mischievous for the International Federation of Women Lawyers (FIDA) and some lawyers to politicise the appointment of judicial officers by the NJC.

He hinted at the possibility of establishing a new Judicial Division in the State, particularly in Bonny, in order to reduce the problems associated with justice delivery in that area.

The Governor said the appropriateness of the option will be studied carefully so that the state is not exposed to torturing legal processes arising from having divisional High Courts.

He also restated his administration’s stance against politics of exclusion and assured that every ethnic group in the State will benefit from his development projects.

Speaking further, Wike admonished the leadership of Okpo Club of Nigeria to be forthright in leading the association, resist mainstream politics interfering with their activities and ensure all members work as a team.

He also harped on the need for all members to understand the cardinal objectives of the club so that every effort they make will be harnessed towards achieving those objectives.

In his speech, Chairman of Okpo Club of Nigeria, Churchill Wosu said the association has a new executive that should be introduced to the governor who is one of their founding members.

Mr Wosu, on behalf of the association, commended the governor for his leadership courage, and determination to change the infrastructural landscape of the state and improved its socioeconomic status.

The chairman urged the Rivers State government to consider the establishment of more divisional High Courts particularly in Obio and Emohua.