Why Nigerian ports are losing cargoes, revenue to neighbouring ports 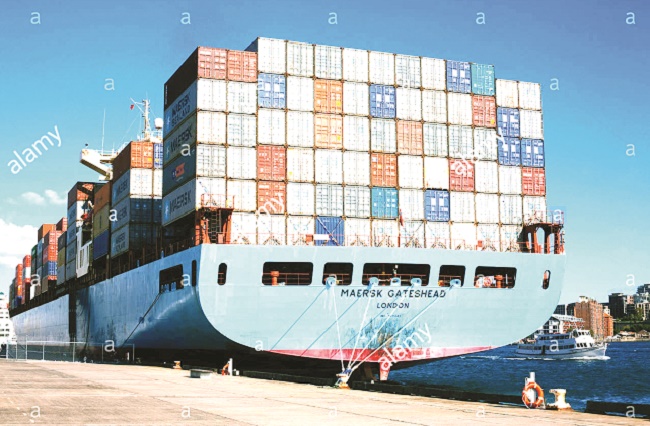 The Minister of State for Transportation, Senator Gbemisola Saraki recently blamed the Nigeria Customs Service (NCS) for the nation’s loss of cargoes and revenue to neighbouring ports in the West African sub-region. However, like Customs, other factors also contribute to these economic losses, writes TOLA ADENUBI.

Despite the announcement by the  Honourable Minister of Finance, Budget and National Planning, Mrs Zainab Ahmed in January 2021 that the Federal Government had acquired three Hi-tech scanners at $18.12 million through Messrs Airwave, limited, and that the scanners would be installed at three major ports in the country, the Nigeria Customs Service (NCS) has continued to inspect containers at the nation’s ports through manual/physical examination of cargoes, thereby slowing the cargo chain processes and making Nigerian ports uncompetitive.

Manual examination of cargoes involves the opening of every container that passes through the ports by Customs officials for inspection physically. While these system has led to shocking seizures which included the exposure of a large cache of pump-action rifles and a large haul of dangerous drugs at the nation’s ports, it foot-drags the entire cargo examination processes and leads to increased cost of doing business at the nation’s ports.

With neighbouring countries deploying modern scanners at their ports which help cross-check cargo content and at the same time verify importers declaration, Nigerian ports had lagged behind as the country still awaits the delivery of the three scanners first approved by the Federal Executive Council (FEC) in 2019 and announced by the Ministry of Finance in January 2021.

While the nation waits for the delivery of the three scanners at her ports, Customs processes which constitute a major chunk of the cargo clearance processes have depended on manual examination of cargoes, thereby constituting a major factor in the loss of revenue and cargoes to neighbouring ports in the West African sub-region.

Another major factor why Nigeria losses cargoes and revenue to neighbouring ports is down to the lack of capacity of Nigeria’s busiest ports of Apapa and Tin-Can. With the advancement of mega-sized cargo-carrying ships by leading shipping companies globally, Apapa and Tin-Can ports have been left behind in the shipping trend due to their shallow draft which ranges between eight metres and 8.5 metres. For these mega-sized vessels, the draft of their destination ports must not be less than 13 metres draft.

With no Nigerian ports boasting of any 13 metres drafts, and neighbouring ports like Port of Lome and Cotonou having 16.5 metres draft, mega-sized ships have had to head towards these ports with cargoes that still end up finding their way into the Nigerian market through porous borders.

According to a business and strategic expert, Dr. Vincent Nwani, “The implication of mega-sized ships not being able to call at any Nigerian ports despite carrying over 70 per cent of cargoes that will still end up in Nigerian markets is that the country loses out on earnings on these cargoes at its ports.

“The cargo throughput earnings that should accrue into the coffers of the Nigeria Ports Authority (NPA) are lost as these vessels can’t call at our ports due to shallow draft. Also, the revenue that ought to have been collected by the Customs on cargoes carried by these mega-sized ships doesn’t come in because such vessels won’t come to our ports for the obvious reason of draft issues.

“At the end of the day, Nigeria loses this revenue, and yet the cargoes will still find their ways into our markets since we have the largest market in the sub-region. It’s a sad situation that we find ourselves in.

“It’s good that the Lekki port is nearing completion. From my last check, I read in the papers that the port is expected to become operational by mid-2022. If that happens, that is the only time Nigeria can compete favourably with these neighbouring ports of ours because only Lekki port has a draft of about 18 metres.

“Aside from the Lekki port, no Nigerian port can currently compete with our neighbouring ports. Every nation wants to remain relevant in the scheme of business, and the only way is to remain competitive. Apapa and Tin-Can ports are river ports with very shallow drafts. There is no way they can compete with ports like the one in Lome or Cotonou. Apapa and Tin-Can ports have outlived their time and relevance. Until we have deep seaports in the moulds of what is obtainable in Lome and Cotonou, the country will continue to lose revenue to neighbouring countries in the sub-region.”

Another factor that has contributed over the years to cargo and revenue losses for Nigerian ports is the issue of congestions inside and along the port corridor. Until the deployment of the NPA e-call system popularly referred to as Eto, the nation’s ports access roads were a beehive of confusion and chaos as articulated vehicles park along the ports access roads, thereby making seamless cargo evacuation tedious.

Aside from the fact that the ports access roads are congested, most of the port terminals are also getting congested as many containers litter the ports due to very slow cargo evacuation processes and other sundry reasons. With Customs needing to examine every container manually, the pile-up of containers inside the port terminals has become alarmingly high, thereby reducing available yard space inside the port terminals, and forcing many vessels stuck in the queue at anchorage along the nation’s waters to divert to neighbouring ports to offload their content.

In the words of a shipping agent, Francis Ejoor, “Shipping business is time-conscious because, in shipping, time is money. When ships spend weeks and even months waiting at anchorage to offload their content in Apapa or Tin-Can ports due to lack of yard space that has been eaten up by too many containers littering the port terminals, some vessels are diverted to neighbouring ports because every delay attracts surcharges (demurrages) on cargoes carried. That is why when a ship has been delayed for too long, and the surcharges slammed on the cargoes that it is carrying is too much to bear for some cargo owners, they abandon their cargoes at the port and won’t come to clear them.

“To avoid such scenarios, most times, we divert such vessels to nearby ports to reduce the amount cargo owners will have to pay as surcharges.”