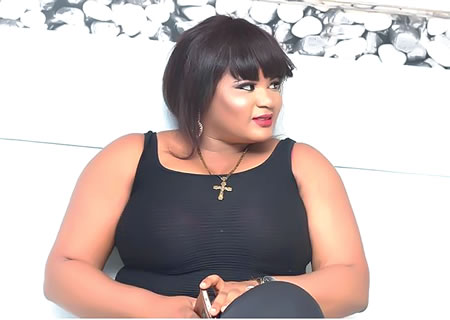 Nollywood actress and producer, Aluyi Oluwashindara, otherwise known as Rihannat may be seen as a fast-rising star who has kept her gaze on the bigger picture. In this interview with SEGUN ADEBAYO, she sheds light on the challenges of combining producing with acting, misconceptions about her personality, her relationship with industry colleagues and her forthcoming projects.

Your name is usually being discussed in the movie industry for different reasons which range from being an actress to a lady that catches the attention of men. How do you cope the pressure?

Acting is my passion and job. Being an actress is a fulfilment of dreams for me. At the same time, I am focused and determined to continue to be on top of my game in my pursuit of greatness. It is only normal for someone as attractive as I am to catch the attention of men. It is only by the way. There is nothing special about it. What matters most is my career which is what I devote all my attention to.

You have been in the industry for sometime now but it seems you are just getting much attention. What took you so long to break out?

Nothing good comes easy and patience they say is a virtue. I have always believed that God’s time is the best. Even with all the attention coming my way now, I know that God is just getting started with me.

Don’t you get distracted by trying to fit into the personality that you want people to see and know?

There is nothing pretentious about me. So, I’m not concerned trying to impress people or trying to create a stereotype.

There would be a number of misconceptions about you. Are you concerned that some perspectives may not really portray your true personality?

Not at all. My career comes first and once things are going right on that front, I am not concerned. As to my personality, I love being me and I hate being fake.

The industry is peopled by different characters and people with diverse backgrounds.How do you try to be different and what have you been getting right?

All credit goes to God for everything I get right. Also, I am a very playful person. I am accommodating and I give respect to those who deserve it and I mind my business.

Having emerged as one of the most sought after, how have you been dealing with all the pies in your hands?

Like I said earlier, I am not pretentious. I am as real as one can be. I do things as God direct me and in return I get my respect. People around me know what I like and what I don’t. I don’t get distracted with frivolities and in all I do, I know God has got my back.

Does it bother you that the remuneration in the Yoruba movie industry is meagre when compared with what is obtainable in other climes?

Well, I am not. I believe things are getting better in our industry as well.

Even with things just improving, manytheatre practitioners would rather stick necks into it rather than quit.How do you draw the strength to keep going?

Passion comes first. It is why I’m into acting in the first place. Once you’re passionate about something, it is easy to keep going.

Looking at your sojourn in the industry, what would you say has worked for you positively till this moment?

Hard work is the key. I put my best into anything I do, most especially my acting career.

If there were people who helped push your career to this level, who would they be?

Simple. Almighty God, my darling hubby and my boss.

What do you fear most about being an actress?

Fans! Why I said fans is that they often forget we are not angels.We are human beings like them. We go broke too and are prone to mistakes. Nobody is perfect.

They say there is no love lost between female actresses. What is your take on this?

In my opinion, we love ourselves because I don’t do double dealing with anybody. I love with all my heart and if you don’t love me genuinely, then it’s left to you.

Which movie gave you your breakthrough in the industry and how did you seal the job?

The movie ‘Rihannat’, which I produced, brought much attention my way. Meanwhile, I am already working on some other projects.

Which project is on your plate now?

I am working on producing a movie, ‘Password’, then take it to the cinemas, God willing.

What are your favourite and most challenging roles till date?

I love acting emotional roles. My most challenging role so far is playing the role of a rogue, and that is because I have a tiny voice.

How successful are you being a thespian?

Glory be to God. I am a producer, a successful businesswoman and a mother. I am blessed to have a happy home.

‘She was our Queen of Arts’

Why I want to retire now – Ibrahim Chatta

Why looking good could cost a fortune – Ojoma Sule

As an actor, you must never be too comfortable —Danmola