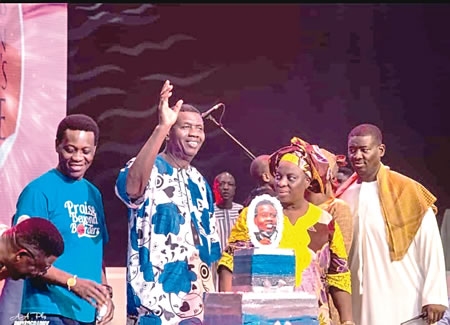 The 2020 edition of the popular gospel concert organised by the youths of the Redeemed Christian Church of God (RCCG), tagged: “Marathon Messiah’s Praise”, to specially celebrate the 78th birthday of the General Overseer of the church, Pastor Enoch Adeboye, witnessed a different dimension as the event turned out to be a consensus of thousands of worshippers and hundreds of gospel music ministers to stage an intense praise.

The event did not only witness all-round praise, but also served as an avenue to intercede for the country, especially with the current pandemic Novel Coronavirus attack across the globe, which has also spread to Nigeria.  One of the popular gospel ministers, Emmanuel Benjamin, (aka Eben), who was overwhelmed with the turnout and attitude of Nigerians towards praising God, led the crowd in an intense worship to rebuke and chase the virus  out of Nigeria and the  entire universe with prayer.

The event, according to the organisers, was also held in various other countries, while many faithful joined the concert at the headquarters’ online.

Also, the music director of the church, Pastor Kunle Ajayi was not missing in action as he led other instrumentalists in a spirit-filled ministration to usher the celebrant into the venue of the four-day event.

The highpoint of the event was when Pastor Adeboye alongside his wife, Pastor Folu, members of the family and top officials of the church, joined the crowd amidst cheers at exactly the 78th hour of the event, marking the actual age he clocked. The celebrant was also assisted to cut his anniversary cake.

When Olanipekun built for God