Tributes have been pouring in for the late poet and teacher, Professor Harry Garuba, who passed on Friday, February 28 in South Africa

Arts and Culture
By Akintayo Abodunrin On Mar 8, 2020 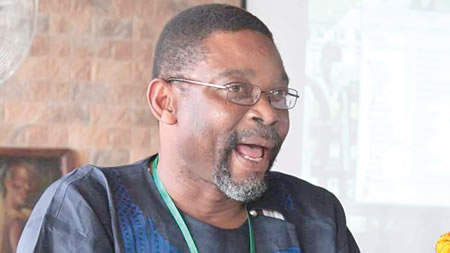 The passing of Professor Harry Garuba at the relatively young age of 61 came as a shock to many, especially as people had assumed he was overcoming leukaemia for which he had been receiving treatment. He had also assured close friends that all would be well and that they shouldn’t fret, hence the deep sorrow when news of his demise in South Africa broke.

Writers who were already mourning the late Chairman of University Press Plc, Dr Lekan Are and Professor and Chukwuemeka Ike, have not stopped highlighting Garuba’s sterling qualities as a teacher, theorist and human being.

Professor Toyin Falola of the University of Austin, Texas, US, couldn’t hide his despair as he wrote: “Professor Garuba was full of talents. Very well known in the literary world, his voice started to echo at Ibadan, crossing the Atlantic, and then detouring to South Africa where he and Professor Kole Omotoso—his fellow Akure citizen—joined in the transformation of the South African academy. Harry was a secularist. I don’t know what he would say if I ask God to invite him to His side, but I seek this assurance. Harry lived a glorious life. Harry had passion and zeal for poetry, the amazing source of his strength. He loved words, the spring of his awesome inspiration.”

Former Dean of the Faculty of Arts, University of Ibadan, Professor Remi Raji-Oyelade whose PhD Garuba supervised also mourned in a lengthy post.

“No one ever had a great supervisor like mine. Harry Garuba allowed the penchant for the radical and the unfamiliar in my formative theorizing. He encouraged and indulged it. He would commend the conclusion but query the method; he would point at the milestones of disputation and ask you the best roads taken to the interpretive end. He was a compendium of knowledge who simplified the theories like no other. Master of anecdotes and great humour, Oga Harry brought tangible meanings to the ideas of great and influential scholars who provided the planks to our path. He was the high priest of African literature and postcolonial theorizing. My indebtedness to Harry G is longer than the beginnings of the Niger to her very end.

“In thirty-nine years of special connection, Harry G was my tutorial master, teacher, friend and supervisor, brother, confidante and mentor; he was my grants advisor, my phenomenal sparring partner; and he was a good man, the undisputable prince and bridgehead of (Nigerian) letters. He wore the garland of excellence comfortably and was generous to a fault. He was a truly talented poet who endorsed others while he sought little recognition for himself.”

Another of his former students at Ibadan, Dr Henri Oripeloye of the Obafemi Awolowo University, Ile Ife wrote: “Prof Harry Garuba ‘is’ a quintessential teacher and probably the greatest humanist I ever encountered as a student. Quite unassuming and brilliant. Always willing to listen to our complaints. The last time we met, he said Henri, you refused to learn how to smoke a cigarette from me. We have lost a passionate teacher, mentor and a great friend. Oga Harry, rest perfectly anywhere you are now.”

Ex-arts journalist, Layi Adeniji, said: “Strangely, it’s in moments like this that words fail one. How can I sum up the Harry G essence in a few words? Here was a man who was so simple yet complex; a man who though a literary juggernaut took pride in being among those at the fringe? Harry G as we fondly called him, was one of our very best but we lost him to South Africa because we don’t know how to keep our very best. He was not just a friend but a mentor and a teacher. I met him for the first time in 1993, when I started my journalism career.

“Thanks to Nduka Otiono, who introduced us. And that was how I joined the group of young writers and journalists who flocked to his office and many times his home to discuss poetry and those other things associated with ant congregation of the acolytes of the creative muse. It was in that house that many significant poets of my generation honed their skills. He was a pathfinder and an inspiration. It is no surprise that ‘Voices from the Fringe: ANA Anthology of New Nigerian Poetry”, he edited became the defining collection for those I classify as the third generation of Nigerian poets. Harry was soft-spoken with some generous dose of humourous mischief but deep. Very deep. A first-class intellectual. He was authentic but more than anything else, a good human being!”

Former ANA president, Dr Wale Okediran said: “Harry and I shared interests in literature and social advocacy. For this reason, we worked closely together in the Association of Nigerian Authors as well as several NADECO activities. We were still in touch when he relocated to South Africa. About 2007, when I visited SA on official duties as a Member of the House of Representatives, I had the good fortune to be hosted by Harry and his South African wife in their Cape- Town home. We still kept in touch after that on some literary activities of common interests until his demise. He was a committed academic and loyal friend. I commiserate with his family, colleagues and friends. May his soul rest in perfect peace. Amen”

Another former ANA President, Denja Abdullahi, said. “Harry Garuba retains a hallowed space in the history of Nigerian literature in his mentoring and nurturing of most of the leading lights of the third-generation Nigerian poets, most of whom like him, later fled the dross and tyranny in Nigeria in those years of the locust under the military. His commitment to art and the rejuvenation of African literary discourse using animist indigenous paradigms was unique and iconic. He was of quiet, deep mien, affable and gave credence to the saying that still waters run deep. His departure is a great loss to African poetry and literary scholarship.”

The late Professor Garuba was born in Akure, Ondo State in 1958 but hailed from Uneme-Nekhua, Akoko Edo local government of Edo State. He studied English at the University of Ibadan and also earned his PhD from the same institution. He published his first academic book, ‘Mask and Meaning in Black Drama: Africa and the Diaspora’, in 1988, and ‘Animist Chants and Memorials’ in 2017. He taught at Ibadan for 15 years before leaving for the University of Zululand, South Africa, where he taught in the English Department. He also taught at the University of Cape Town until 2019. He published widely in the fields of African and postcolonial literature.