What I told Sunday Igboho after my son was murdered by herdsmen —Aborode, father to slain Igangan politician 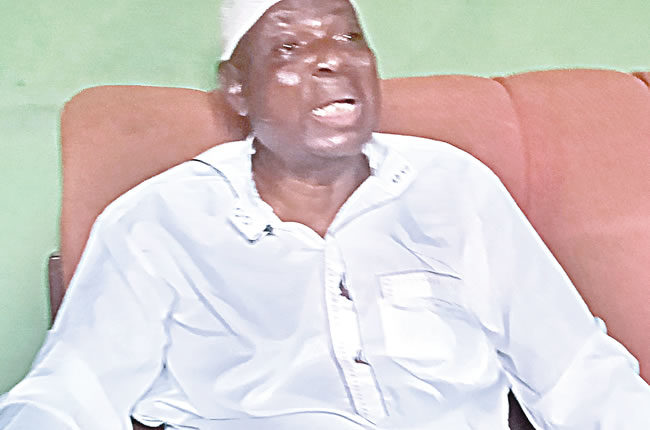 In this interview by KEHINDE OYETIMI, Alhaji Lasisi Folohunso Aborode, father to deceased Dr. Fatai Aborode who was allegedly murdered by herdsmen in December, 2020, speaks about the long history of herder settlements in Ibarapa axis of Oyo State, the advent of unrest in the zone and the death of his son.

How long have you lived here in Igangan?

I am an indigene of Igangan. I am retired as chief environmental health officer. I am the father of the late Dr. Fatai Aborode. I am also the Baba Adinni of Igangan land which means that I am one of the religious leaders of Igangan. I was on January 16, 1942. I clocked 79 on January 16, this year.

It is impossible to speak about Igangan and the whole of Ibarapa without taking into cognizance the place of Fulani and Bororo herdsmen. How did life with these herders start?

From a very young age while I was still a pupil, our fathers were friends with Fulani herders. Their friendship was so useful to the extent that our people would buy cattle and keep under the watch of the Fulani herders. My forebears were known to be blacksmiths. My people gave these herders hoes and cutlasses; the Fulani herdsmen were also involved in farming. They built settlements and the relationship between us and them was very cordial. If we, as Yoruba and owners of the land, had any festivities, the Fulani herders would come and celebrate with us. We also visited their settlements whenever they had any festivity. In fact, as Muslims we also celebrated Islamic festivities together. Fulani are known to be Muslims, so also the larger part of Ibarapa and Igangan in particular. We had no issues with them; we lived together in harmony. This was around 1949/50.

After a while, this was about 40 years back, some herders referred to as Baru, also came around. They were not troublemakers; they were herders. They had a lot of cattle. Their settlement was not far from the main market in the community. They would come to buy items at the market; their wives did same. When they took their cattle to graze, these Baru herders ensured that they avoided cultivated farmlands. They were careful and considerate. When they met our women on the farms, they neither molested nor harassed them. These Baru herders were respectful and courteous. In fact, whenever they met our people on the farm, they would be invited to join them in a meal; they would be offered food and water. The atmosphere here was congenial.

Your description is idyllic. What then went wrong?

Some herders are called Bororo. These Bororo herders are the worst to interact with; they are inhuman, unforgiving, selfish and wicked. They exhibit such violence even among themselves. Within a Bororo herders’ family, we notice such display of violence. They kill without any remorse. They are vicious. If a Bororo herder discovered that his brother betrayed him in any guise, he would behead him. We became worried by this show of madness.

On our farms, we would come across very young children herding cattle. We would not know that the parents of these child-herders were hidden on a tree. Should the farmer confront the child-herder for destroying his farm, the hidden chaperon on the tree would suddenly appear and accost the farmer. The farmer would then be attacked.

It is known all over that the Yoruba are largely farmers; it is not different here in Igangan. These herders would move their cattle into our cassava, corn farms and destroy them all. This is wrong. Look at the loss of investment by the farmer; look at the labour loss. Why can’t they take their grazing elsewhere? Whoever tells the herdsmen to take away their cattle from the farm will be attacked. Many farmers have lost their lives in such circumstance. These herders go about with swords and guns.

Our wives and women here are also farmers. A man would cultivate his farm; his wife would do same. That is our practice here. Unfortunately our women are not safe on the farms. In some instances, some women who were waylaid by the herdsmen on the farms were raped to death. Some were lucky to escape after they were raped. Some of the rape victims were old women between 70 and 75 years old.

What did government do concerning all of this?

We still call on government to do something drastic about this. We are grateful to the secretary of the farmers’ association here in Igangan, Mr. Taiwo Adeagbo. He has been relating much of our frustration to the relevant authorities. Do you know that in all of this, no Yoruba person must do havoc to any herdsman? Should a Yoruba kill a Fulani or Bororo herder, that community which produced the Yoruba killer would be destroyed by the herdsmen. Yet we are referred to as the owners of the land. Do we own the land? Many people have been kidnapped. These kidnap victims would be taken to very far distances and huge ransom would be demanded by these herdsmen. The suffering that the victim would suffer is better imagined than experienced. Many of our people have suffered such fate. They demand for as much as N50 million in ransom. Sometimes, they demand N10 million. Where do you expect an agrarian community to get that? Those who are able to pay escape with their lives; those who are unable to pay are killed. Many innocent people have been kidnapped and their corpses found many days after.

I have been alive and around for a while now. How do you see and hear this and not get saddened? That is why our people are insisting that these herders leave. About three months back, they became very particular in kidnapping and killing people here in Igangan.

My late son owned a big farm. He was a mechanized farmer. He would give these herders salt. In fact, he went as far as employing as harvesters the wives of these Fulani herdsmen. He did this whenever it was harvest time. He ensured that they were paid handsomely. He was generous to them; he was friendly.

How did he meet his death?

He had planted soya and it was time to harvest. He had a relatively large body of employees; he had two farm managers. He got them motorcycles to aid them in their supervisory role. After the discharge of their daily duties, he would ensure that each employee was well paid. He would feed them. He had makeshift houses for them on the farms and so people travelled from neighboring communities so as to work for him and earn some money. The women who worked for him on the farm were great beneficiaries of this gesture. In fact, many of the workers never wanted such harvesting periods to be over considering the financial remuneration that they got. When his corn farm was not doing well and if it had little or no prospect at a good yield, my son would call the various herders’ communities and ask them to graze their cattle there freely. Normally the herders would have paid handsomely for this. The herders love grazing their cows on corn farms.

However on this day, December 11—it was the worst day of my life—I was not at home. We are very pained. We are true Muslims; my son was a Muslim. The Quran taught us that whoever God loves, he tries by unsavory vicissitudes of life. Look at the life of Prophet Muhammad (peace be upon him). He had seven children. Only one buried him; six of his children died while he was alive. The death of one of them, Kasumu, was very painful to him. He loved Kasumu so much. He died on Ileya (which is a very important festivity among Muslims). The enemies of Prophet Muhammad mocked him; they said considering his loss, he would not perform his religious obligations to God. The Prophet was human. There is an angel called Jibril. He is very close to God. Angel Jibril travelled down to the earth after God mandated the angel to tell the Prophet that he should perform his religious duties despite the fact that God understood what he was going through. God said the Prophet must accept his sovereignty. The Prophet went ahead and performed his religious obligations.

The death of one’s child is terrible. No parent prays for it.

What is the government doing about this?

It is only government that can explain what it is doing about this. The only person who God has used as our messiah is Sunday Igboho. My son was a politician. When he was with Oyo State former governor, Ladoja, my son and Sunday Igboho got to know each other. Sunday Igboho visited me. He greeted me so warmly. He told me: ‘Baba, I knew your son very well while we were together with former governor Ladoja. Your son was generous and accommodating. I never knew we were from the same geographical spread here in Ibarapa/Oke Ogun. Look at my tribal marks. They are exactly like yours. I also saw the same tribal marks on your son’s cheeks.”

Sunday Igboho then told me that whoever was responsible for his brother’s (my son) death would feel his wrath. He promised to chase them out wherever they could be hiding. I pleaded with him to be patient and calm. I begged him to contain his anger. He informed me that he would return in seven days and that Seriki Saliu should vacate this place.

When next Sunday Igboho would return, the crowd that received him was unprecedented. The last time I saw a glimpse of such crowd was when I visited Mecca on holy pilgrimage. For over six hours, the crowd surged on his visit. It was a standstill.

No farmer in this region would want the herders here, considering the huge destruction that they have caused. It is now left for the government to find a lasting solution to this. Those kidnappers make a lot of money. Many relatively rich indigenes who could not sleep at home have returned and can now sleep since Sunday Igboho visited.