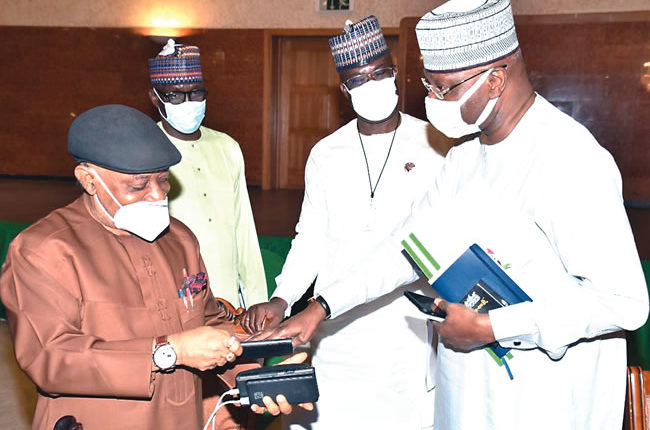 Soji-Eze Fagbemi, looks at the report of the technical committee on Premium Motor Spirit (PMS) Pricing, submitted to the larger Bipartite Committee of Federal Government and the organized labour unions and reports its major highlights and recommendations.

FOLLOWING the bipartite engagements between the Federal Government and the organized labour unions, as a result of the deregulation of the oil sector and incessant increases in prices of petroleum products, the government constituted a technical committee on transparent market-based PMS pricing.

The committee was inaugurated on December 14, 2020 by the Minister of Labour and Employment, Senator Chris Ngige, as part of the continuation of the dialogue between the Federal Government and the organized labour unions.

The technical committee was constituted and empowered by the terms of reference jointly agreed to by the bipartite parties, with membership cut across the presidency, government ministries and agencies in charge of petroleum and price modulation as well as the two labour centers – the Nigeria Labour Congress (NLC), the Trade Union Congress (TUC) and their two affiliates in the oil and gas sector, NUPENG and PENGASSAN.

Led by Onochie Azubuike Anyaoku, the committee submitted its report in a midnight meeting between the Federal Government and the organised labour, held at the Banquet Hall of the Presidential Villa last week.

According to the committee Chairman, the report highlights the transparent price determination premised on the Petroleum Products Pricing Regulatory Agency (PPPRA) template parameters and provides recommendations.

This is to further encourage private sector participation while promoting active engagements between the regulators, market operators, organized labour unions and other stakeholders.

Going to the recommendation, the report first justifies the need for deregulation, which, according to Anyaoku, has become imperative. The report said the burden on the PMS subsidy reduced the remittance to Federation Account Allocation Committee (FAAC), as well as allocation to states of the federation.

This, the report emphasized, led to the inability of many states to pay workers salary and carry out developmental projects.

Besides, it said the commitment of the government to subsidy payment has been a major distraction to other sectors of the economy, as funds that would have been used to develop other sectors and improve the wellbeing of Nigerians were used to settle subsidies.

Anyaoku, in his presentation also, revealed that price differential across the West African subregion gave room for arbitrage. “Volumes of Nigerian subsidized PMS were smuggled to neighboring countries. This escalated subsidy burden and exposed the Government to about N1 billion paid as subsidy everyday (2016-2019),” he added.

The report said: “The Federal Government was constrained to deregulate the price of Premium Motor Spirit (PMS), effective March 19, 2020, due to severe economic and fiscal challenges posed by global economic realities of the COVID-19 pandemic.

“Oil revenues to fund the budgets were challenged by price crash and subsequent OPEC production curtailments.  The implementation of the agreed production cuts further exacerbated fiscal pressure resulting in a huge deficit in the 2020 budget revenue projections.”

Further justifying government decision, the report emphasized that the implementation of deregulation has relieved the Government of the huge fiscal burden of subsidy, but added that “the impact of market reflective price has continued to influence the inflation trend in the domestic market leading to further concerns by the organized labour unions.”

Therefore, Anyaoku said: “The Government and the organized labour unions, based on mutual understanding of the economic realities and the need to ensure transparent market based pricing of petroleum products, embarked on bipartite engagements with the aim of further enhancing the public confidence, as well as firm commitments on key priority projects to be delivered by the government towards improving the economic wellbeing of Nigerians through domestic refining and jobs creation, among others.”

Anyaoku said the committee conducted a detailed review of the PPPRA template cost elements, highlighting the major cost drivers for retail pump price of PMS in Nigeria to arrive at its findings and subsequent recommendations.

The committee said it proposed some recommendations, based on the extensive review of the pricing framework and in line with its terms of reference.

On the template parameters — cost element — the technical committee said that product cost should be based on Rotterdam Barge. It recommended that the PPPRA should convene periodic meetings with NNPC and other importers to ensure actual cost of supply reflective determination as an interim solution.

It stated that the NLC, TUC and their affiliates, PENGASSAN and NUPENG, should witness the transparent determination at the periodic meeting.

“The PPPRA presently monitors Platts quoted data on FOB Rotterdam barges. This should continue to form the basis of price determination until the WAF (West Africa) basket is liquid and transparent enough to warrant its adoption on the pricing template.” It said.

On the issue of freight, the committee said the PPPRA Board should approve the inclusion of discount/premium in the PPPRA template, and immediate adoption of freight adjustment to reflect average import premiums.

It also added that the NNPC and all importers should provide accurate and reliable sources of data to PPPRA.

Also, on the very important issue of exchange rate, it recommended that all importers, including NNPC should adopt the same forex (FX) window used by PPPRA to ensure alignment and accurate pricing.

To determine the lightering expenses, the report said the PPPRA Board should adopt a weighted average as the basis for the determination; while it (PPPRA) should also ensure that market rates for shuttle vessels hired are monitored and reflected on a monthly basis.

More importantly, the report said the Federal Government should enforce immediate collection of the Nigeria Port Authority (NPA) and the Nigerian Maritime Administration and Safety Agency (NIMASA) in Naira to reduce pressure on forex demand and pump price hike. It also recommended that the government should adopt a 50 per cent reduction in NPA dues & NIMASA charges.

It stated that the PPMC should provide PPPRA with periodic data on the percentage of volume sold to market on credit for adjustments on applicable finance cost, to lower the pump price accordingly.

On the application of bridging fund, it recommended adoption of PPPRA Board approval for inclusion of the revised bridging cost N9.11/litre, adding that the revised rate by the Governing Board has been forwarded for government’s approval.

Other fixed element and admin charges, according to the report, should maintain the same provision as adopted on the current pricing template by the PPPRA Governing Board.

Further in its recommendation, the committee advised the Federal Government to fasttrack the fulfilment of agreed commitments with the organized labour unions.

It added that the Federal Government should carry out, “massive campaigns on the benefits of deregulations and the targeted communications on the distinction between price fixing during the regulated price regime and issuance of monthly guiding price by PPPRA under the deregulated regime.”

It also advised the government to consider launching specific projects targeted at winning the confidence of Nigerians on the key benefit of deregulation to the common man.

“In the light of the foregoing, the Chairman of the bipartite committee is kindly invited to graciously consider the technical report presented herein for approval and further directives please.”  Anyaoku, said.

At the end of the bipartite meeting, the Minister for Labour and Employment, Dr Chris Ngige, disclosed that the meeting had been adjourned to February 22, 2021, when it would deliberate on the report.

According to the minister, the adjournment was to enable the representatives of organised labour subject the report to the analysis of their various organs

The President of NLC, Comrade Ayuba Wabba, in his comment said the organised labour needed to do a broader consultation to come up with clear positions on what would be beneficial to both the Nigerian workers, and all Nigerians.

He emphasized that the issues at stake touched on the life of every Nigerian, adding, “the whole essence of what we are arguing about is how to bring not only price stability but also affordability.”

Also, the Secretary to the Government of the Federation (SGF), Boss Mustapha, had assured the labour leaders of the Federal Government’s commitment to the implementation of decisions reached by the joint government and labour committee.

The SGF said: “Our pledge on the government side is that whatever decisions are reached, we will ensure that the government honours its own part of the bargain, so that we can maintain and sustain industrial harmony in our nation.”

What I told Sunday Igboho after my son was murdered by herdsmen —Aborode, father to slain Igangan politician