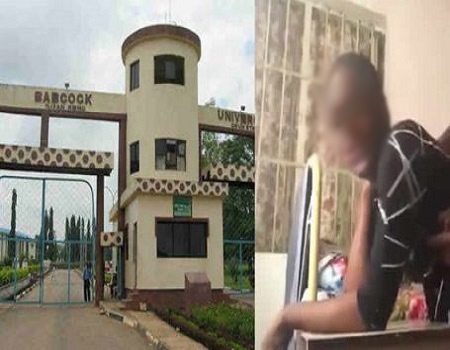 THE management of Babcock University, Ilisan Remo, Ogun State, has described a short video that went viral on Wednesday as a sad commentary on the moral decadence that has bedevilled the society, stating that the illicit act never happened on their campus.

The institution, in a statement entitled: “Re: Sex video of ex-students of Babcock University,” signed by the Director, Communications and Marketing, Joshua Suleiman, revealed that the act occurred in a hospital in Abeokuta, Ogun state in April this year.

The viral video involved a male and female student of the university in a sex romp.

According to investigation, the two culprits were believed to have been in a relationship and were expelled from the school since February, following his reaction to addiction-related treatment.

“The boy in the video was expelled from Babcock University in February this year after investigations and due process proved that he was into certain grievous misconducts, the acts for which the university has zero-tolerance.

“His girlfriend in the same video was, until the video broke out, a third-year student of Accounting of this university. After due process, she was promptly expelled from the university for the violation of university rules and regulations.

“The place where the immoral act took place, according to her written statement, was at the hospital in Abeokuta, Ogun state, where the boy has been undergoing rehabilitation for different destructive addictions.

“According to the girl, the incident took place in April this year during school vacation, when she visited the boy at the hospital. The act did not take place in Babcock University,” the statement read.

The institution assured the public that it “remains committed to the highest moral standards and will remain a standard-bearer for quality education in character, learning and in service to humanity.”

Sources informed the Nigerian Tribune that the girl consented to be filmed to serve as “don’t miss me love” for his boyfriend while she is away.