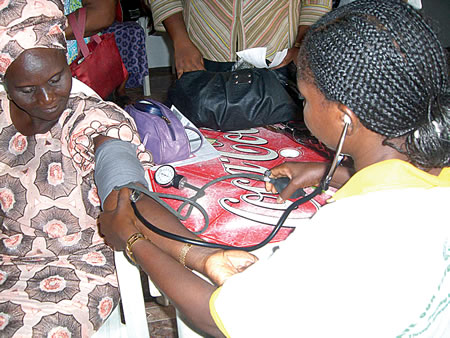 Across multiple African countries, hypertension is higher among the older population in West Africa and obesity is significantly associated with a two-fold increase in hypertension among both men and women, a study has said.

According to the study, although proportions with hypertension differ significantly by region, country, and age, obesity in both sexes was higher in southern Africa than any other African region.

While hypertension prevalence ranges from 37 per cent to 75 per cent and men had significantly higher proportions of hypertension compared with women in Africa, they suggested that the regional differences in both obesity and hypertension may be attributable to disparities in socioeconomic, lifestyle, nutritional, and environmental risk factors at the regional level as well as genetic factors.

The researchers said the large sample size and the high proportion of hypertension and obesity makes the case for policy makers to design interventions to address these two important cardiovascular risk factors in Africa.

The study noted: “It is anticipated that interventions addressing obesity will likely lead to more effective control of hypertension in Africa.

“Strategies for managing obesity-related hypertension on the continents have been poor with most aimed mainly at treating hypertension and other metabolic consequences of obesity, such as dyslipidemia and diabetes mellitus.

“Interventions specifically targeting obesity-related hypertension are needed on the continent and such intervention strategies should aim to treat the underlying causes of obesity.

“Primary prevention targeting the development of effective, culturally sensitive strategies for the prevention and treatment of obesity will benefit patients in Africa.

“In addition to genetic determinants of obesity-related hypertension, other ways of addressing this condition in Africa include implementation of clinical trials to identify more appropriate drug therapies for reducing obesity-induced hypertension.”