We suspended strike due to patriotism, compassion —NASU, SSANU

Say ‘none of our demands has been addressed’ 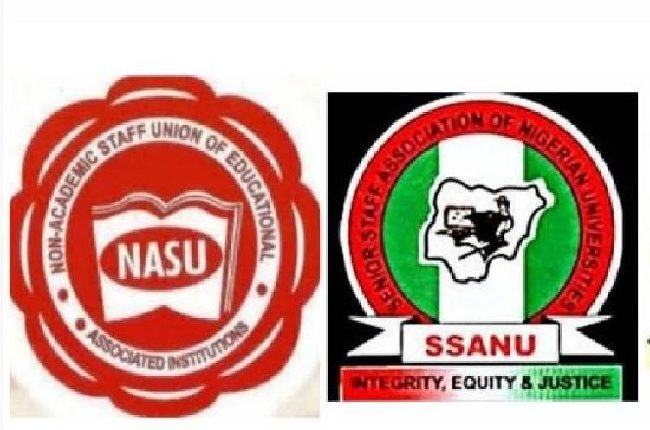 THE Non-Academic Staff Union of Universities and Associated Institutions (NASU) and the Senior Staff Association of Nigerian Universities (SSANU), said their two-week old strike was suspended because their members were patriotic, as none of their demands has been met.

But the unions, under the Joint Action Committee (JAC) of NASU and SSANU, said they reached an understandings with the government side with specific timelines in line with democratic tenets and practice, at the end of their deliberations.

Comrade Peters Adeyemi, NASU General Secretary and Comrade Mohammed Ibrahim, National President of SSANU, said the written commitment was gotten from the government via a Memorandum of Action and in line with the majority resolution of the unions members across the universities and inter-university centres.

They said: “Following the announcement of the strike action, discussions ensued between the Federal Government, led by the Minister of Labour and Employment, Senator Chris Ngige and the leadership of the two unions at the meetings held on Tuesday, February 2; Thursday, February 11 Thursday, February 25, 2021.

“At the end of the deliberations, understandings were reached with the government side with specific timelines in line with democratic tenets and practice. We also consulted our various organs at the branches with a view to getting resolutions on the way forward on the strike action.

“The decisions of members from the various branches were informed by patriotic intentions given the fact that none of the specific issues over which the strike was embarked upon have been immediately addressed.”

The JAC leadership pointed out that the strike was suspended with expectation that the government will act in good faith on the Memorandum of Action.

The JAC said: “We hope that the government shall reciprocate the patriotic and compassionate consideration of the leadership of the two unions and ensure that the agreements are implemented according to the set timelines.

“We cannot afford to have our system set back due to protracted and avoidable industrial actions and we believe that the ultimate buck to avoid industrial actions in the university system lie solely on the government. Our decision should never be taken as cowardice or foolishness but in the interest of the students and the system which we hold very dear to our hearts.

“Even though the government had given promises and assurances to stick to the terms of the Memorandum of Action as specified, the actions or inactions of government in the following days and in line with the timelines shall however determine their sense of honour and respect for Collective Bargaining Agreements.

“Our resolve, going forward is made in the interest of the hapless Nigerian students and the educational system which has suffered untold damage and deterioration occasioned by the COVID-19 pandemic and industrial actions in the last one year. Having a prolonged strike by the JAC of NASU and SSANU lasting into months would add more to the already sorry state of the University system.”

The food blockade of the North and matters arising