We stand by our report on Quorum helicopter crash ― AIB 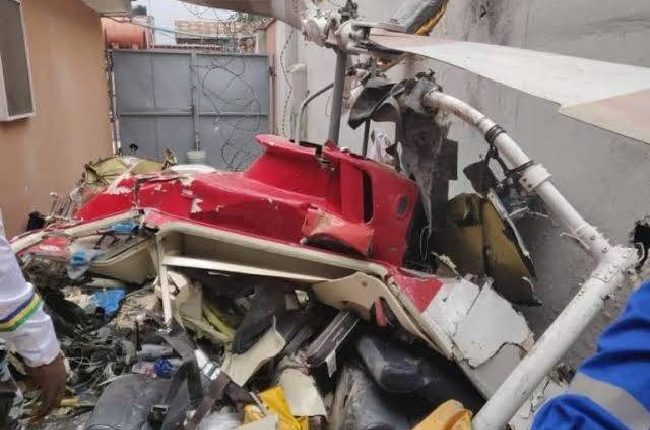 As controversy trails the preliminary report released by the Accident Investigation Bureau (AIB), Nigeria on the accident involving a Bell 206B helicopter, which occurred in Ikeja, Lagos on 28 August, 2020, the bureau has announced that it stood by its report.

The bureau attributed it’s latest position to what it called unsubstantiated claims made by the Operator of the crashed helicopter– Quorum Aviation Limited.

A statement issued by the AIB to clarify its position said: “It is important to state that the objective of our investigations is to improve Aviation safety by determining the cause(s) and contributory factor(s) of an occurrence and to issue targeted safety recommendations to forestall future reoccurrence of such accidents or incidents.

“In accordance with the Civil Aviation Act 2006 and Annex 13 to the Convention on International Civil Aviation, AIB investigation shall not apportion blame or assist in determining liability.

“It is also important to note that AIB does not authenticate documents with the affected Operator but with the Regulatory body – the Nigerian Civil Aviation Authority (NCAA), which is the custodian of all the certificates.”

AIB it’s reacting to the news circulating in the media.stating how Quorum Aviation Ltd, the operator of the ill-fated helicopter, faulted a portion of the preliminary report which stated that there was no evidence of submission of an application for exemption to the regulatory body by the Operator.

The Bureau had stated, in the preliminary report, that the pilot’s proficiency was valid till August 24 2020, four days before the crash, while the medical certificate of the pilot expired on August 6,  2020.

The bureau, however, maintained that the letter, purportedly written to the Nigerian Civil Aviation Authority (NCAA) by the Operator and released to the public, did not bear any of the normal markers of a letter which has passed through the official process of the Regulatory body. It has no official stamps nor proof of receipt by the NCAA.

“Furthermore, the Operator has not shown the response of the NCAA to this purported application, nor have they tendered evidence of the approval of their request for extension/ exemption.

“However, the NCAA in her response to AIB’s enquiry on the subject states that, “The Authority does not have in its record any evidence that the deceased or his employer applied for the exemption provided for by the AOL (DG18/20) and AOL (DG20/20) before the accident occurred on August 28, 2020.”

Protecting its integrity the bureau declared that as a professional and responsible organisation, that it would not normally respond to these distractions, but the need to protect the integrity of “our investigation has made it imperative in this case.

“The onus is on the Operator to prove that its purported letter was appropriately received by the NCAA, and that the relevant approval was obtained.

“Aircraft accident investigation is a serious matter and AIB, as the Federal Government agency charged with this responsibility, is a very thorough and professional body.

“The Bureau, as a matter of principle, does not join issues with the Airlines it investigates. It is the Bureau’s duty to focus on how to improve Aviation safety through well conducted, timely and quality investigations.

“AIB conducts a thorough and transparent investigation process, which entails working closely with several stakeholders including the manufacturer of the aircraft, Engine manufacturer, the State of design, the Civil Aviation Regulatory bodies, the Air Navigation Service Providers, the Aerodrome operators, the affected aircraft operator and other law enforcement agencies.

“We are currently focused on unearthing the cause(s) of this crash which is the first Air transport fatality recorded in Nigeria in over four years.”

The bureau added that it was imperative to note that Preliminary reports only contain details of the initial facts, discussions, inspection of the accident site and the wreckage and findings surrounding the occurrences, so far gathered.

“The ill-fated helicopter had departed Port Harcourt Military Airport en-route Lagos but crashed a few minutes before reaching its destination, leaving the pilot and two other occupants fatally injured.

“Preliminary investigations reveal, among other things, that there was no fuel in the helicopter’s tanks even as the helicopter had no fuel jettisoning capability.

While stating that the investigation was still in process, the AIB called on the public and the media to desist from hearsay and wait for the final report which will be released soon.

No criminal elements will be pampered in Plateau ― Gov Lalong