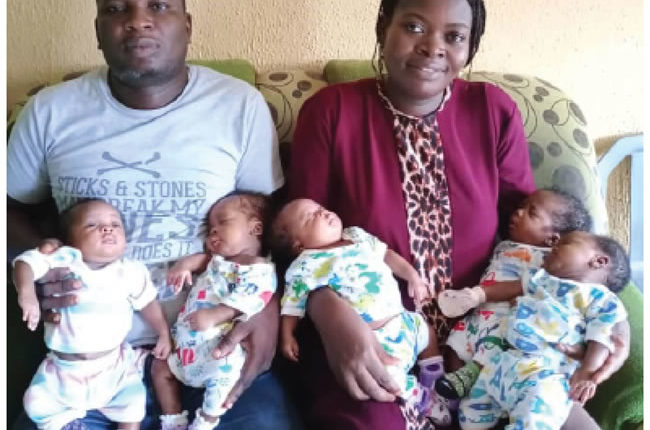 FOR seven years in marriage, they were childless. They lived daily with the hope of becoming parents, but never knew when that would be. But when their hope eventually turned into reality, the result was beyond their expectation, as they gave birth to quintuplets.

They were born on January 18, at the Lagos State University Teaching Hospital (LASUTH), Ikeja, through a cesarean section that lasted only three minutes. And since then, the parents have been having mixed feelings. They are happy and grateful to God for making them parents on one hand, but are in constant worries on other hand because the babies’ needs have eaten deep into their lean pocket.

Quintuplets and other multiple births otherwise known as super twins are mostly induced, according to fertility experts, by the use of fertility-enhancing drugs or through In Vitro Fertilization (IVF) process under average gestation period of around 30 weeks against 40 weeks for a full-term baby.

The couple, however, confirmed the former method as their chosen option.

Narrating their parenthood journey to Sunday Tribune during an exclusive chat at their No 5 Ejide Close residence around Orelope, Egbeda area of Lagos State, Mr Omage, the father of the babies, said they were truly hoping for baby, one or two, at the most, as a compensation from God for their seven years of waiting.

“That was all that was on our minds,” Mr Omage, who hails from Uzebba in Owan West Local Government Area of Edo State, stated.

Mr Omage is a graduate of Agricultural Science from Ambrose Alli University, Ekpoma, and is working with the Rubber Research Institute of Nigeria in Benin City, Edo State, as a level 8 civil servant, while his Ilesa, Osun State-born wife, Foyeke, a Microbiologist and Master’s (MBA) degree holder from the Obafemi Awolowo University (OAU), Ile-Ife, is a job seeker.

Speaking further after the initial story of their period of childlessness, Mr Omage, who is 35 years old like his wife, told Sunday Tribune that he was very happy to recieve the news of his wife’s pregnancy.

“She told me on phone as I’m based in Benin while she lives in Lagos. But I was scared when she informed me a few weeks later that she went for scan and that the machine revealed she was carrying four babies.

“I was still in fear when she called me about a month later that she went for another scan and the result came out to be five and not four babies again. And for many days, it was as if I was dreaming, such that I asked her many times to go for re-confirmation.

“My worry is simply because of the financial implication of multiple births, especially by poor couple like us and the high inflation situation in the country.”

So, on December 8, last year, his wife went for routine check at LASUTH, where she had registered for antenatal care. At the end of the check, her doctor placed her on bed rest on the premise that she would need to be monitored closely, more so the hospital never had the experience of handling quintuplets’ case since its establishment 66 years ago.

So, Mrs Omage remained in the hospital till January 18, when she gave birth and spent additional 11 days post-delivery.

In the course of all these, the couple had spent a fortune according to Mr Omage, as series of medical tests were conducted on his wife and each of them resulted in recommended drugs and treatment, at huge costs.

At this point, Mrs Omage cut in and continued the conversation with Sunday Tribune, saying: “We paid for everything at LASUTH. We paid for tests, we paid for drugs, we paid for bedspace and other services rendered to us. And my case, having quintuplets, made the bills very huge.

“We were calculating our expenses initially, but at a time, we lost count, because they were so numerous. But I can never forget that each injection I took cost N3,000 and I took it everyday for over a month. What about drugs and series of tests I did. We paid for them all.

“The bill for admission alone was close to a million naira. And if not for my husband’s health insurance scheme as a government worker which covered a few aspects of the expenses, the bills would have been in millions.

Mrs Omage does not have money to support her husband. She is a job seeker. She had only worked briefly as a marketer at a private medical laboratory around Egbeda and was paid a meagre salary.

Now that she had left the centre due to her inability to cope due to her pregnant state then, there is no salary for her again, either small or big.

And her level 8-officer husband has a very lean pocket that could not sustain two of them conveniently, let alone now that they are seven and still have two other dependants who are around to help them attend to their babies.

“We have exhausted our little savings and also resorted to borrowing from people until we were left with nobody to approach again for loan,” she said.

For LASUTH to discharge them with the babies without settling their entire bills is even deemed a miracle.

The couple explained that the hospital management, including the Chief Medical Director (CMD) and the head of welfare section told them plainly that it was against LASUTH’s policy to allow patients who are indebted to the hospital to go home even after being officially discharged.

“I think we were given special consideration because of the large number of babies involved, as where to keep them was becoming a challenge because there is no enough bed space in the hospital. Even at that, we were discharged on stringent conditions. My husband was compelled to write a commitment letter, stating that he would pay all the N257,350 balance within a three-month window, which lapses in May.

“My husband begged them to spread the payment to cover many months up to December since we have no other means to get money outside his salary, but the hospital rejected the offer; instead, it threatened to bill us for any extra day(s) we spent to perfect the agreement in black and white.

“So, he had to submit the letter and attached his passport photograph and driver’s license before we were allowed to leave the hospital on January 29.”

Now at home, the real spending has just started for the couple. They have to feed and also feed the babies. They have two dependants who purposely came to help attend to the babies. Their house rent is almost due for renewal. The electricity bill and all manner of other bills, including refuse collection are also mounting without the couple having an idea of how to settle them.

Certainly, no adult can do without food for days when he or she is not on hunger strike or fasting, let alone, babies.

But as it is, the six months exclusive breastmilk feeding recommended by the World Health Organisation (WHO) for newborn is completely out of arrangement for the quintuplets.

“Where would I get enough breast milk to feed them all and at what intervals do I attend to them round, including when they are crying ,” Mrs Omage asked rethorically.

So, in addition to breast milk, the babies are also being fed with baby formula and that is how their feeding pattern would continue till they are weaned.

Interestingly, their mother said they eat a lot as they are healthy and full of life. According to her, they consume two medium-sized 400 grammes of baby formula everyday and it is N2,400 per tin.

“That is not all. We buy pampers now and then and also drugs to give to them. Now, we don’t know what to do again and who to approach for help. Relatives and friends have tried their best, but all is like a drop of water into an ocean. And because of this, we are so worried even though we are also happy for having them as gifts from God.

“That is what prompted us to go this way. To appeal to the good people of Lagos State and across Nigeria as well as corporate organisations and religious bodies to please, in the name of God, help us.

“We want Governor Babajide Sanwo-Olu to please come to our rescue. We had written to his wife, Mrs Ibijoke Sanwo-Olu, for assistance before now, but no response till date. Though, we are not sure whether or not our letter got to her table.

“So, we are equally appealing to other governors and their wives and other well-meaning Nigerians to please, come to our aid.

“They should do this for the sake of God and the newborns. We cannot cope with taking good care of them in this our condition. I have no job even as a Master’s degree holder. My husband’s earning as a middle-level civil servant cannot sustain the family. We are in serious need of help,” Mrs Omage pleaded.

Yinka: Basking in the shadow that you cast

‘I closed down 5 thriving businesses to embrace full-time ministry’