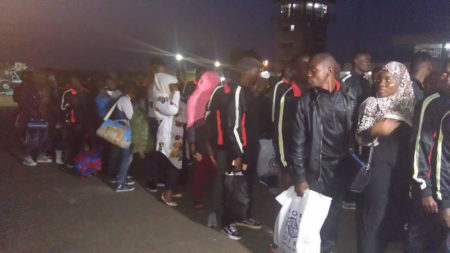 The International Organisation for Migration (IOM) Sub-Office in Lagos on Thursday said that it had in the last five years provided assistance to about 17,000 Nigerian voluntary returnees from Libya.

Mr Abrham Tamrat, IOM’s Programme Manager of Migrant Unit for Nigeria and Head of Lagos Sub-Office made the disclosure to the News Agency of Nigeria (NAN) in Lagos.

“We have had quite a number of Nigerian returnees that we assisted from transit destination.

“We have received and assisted about 17,000 Nigerian voluntary returnees over the past five years.

“We have during this period supported communities, governments and strengthened CSOs structures in Nigeria. And this has been millions of dollars project,’’ he said.

Tamrat said that the international organisation had yearly received and assisted the returnees at different times in large numbers of 400, 450 and 900 within the period.

Tamrat, who said that there were signs of a reduction in the number of Nigerians embarking on irregular migration, also disclosed the organisation’s plan to intensify tracking of movements across borders.

“We have seen a slight reduction in the irregular movement of Nigerians over the last one year.

“IOM has put in place several measures for tracking movement of people across borders,’’ he said.

Niger govt to strengthen relations with UNICEF, other devt partners