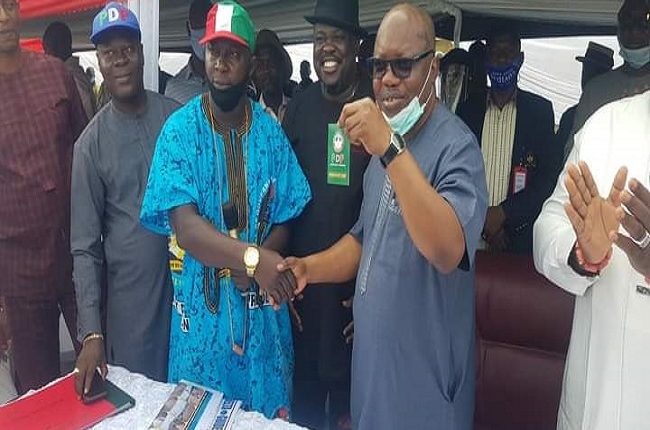 Former governor of Delta State, Dr Emmanuel Uduaghan on Monday officially return to the People’s Democratic Party (PDP), saying “it feels refreshing to be back home.”

The former chieftain of the All Progressives Congress (APC) in Delta State said he’s back to join forces with the PDP.

“I am back to join forces with other party greats to strengthen our party, the largest Party in Africa -PDP!

“Having tasted the other side, it feels refreshing to be back home!

“Thank you all for receiving me back. It feels like I never left.

Uduaghan had left the PDP for the All Progressives Congress (APC) in the build-up to the 2015 general elections and contested the Delta South Senatorial district ticket but lost to incumbent Senator James Manager of the PDP.

Unconfirmed reports last week had it that Chief Uduaghan was at the verge of returning to the PDP after a closed-door meeting with Chief James Ibori, a former governor of the state.

Ibori, regaled as the political godfather of Delta politics was said to have met Uduaghan along with Governor Ifeanyi Okowa at the Government House, Asaba as well as in Oghara, country home of Ibori.

Scores of Uduaghan’s supporters, who are currently at Abigboro, the Itsekiri home of the former governor, are on ground for the official defection to the PDP.

Uduaghan was governor of Delta on the PDP platform for eight years (2007-2015), he was also a Commissioner for Health and later Secretary to the State Government under the administration of former Governor Ibori.

The former governor was said to have had a frosty relationship with his successor, Senator Ifeanyi Okowa, also a medical doctor, leading to his defection to APC.

He, thereafter, formed an unrewarding alliance with ousted APC National Chairman, Adams Oshiomhole and other chieftains of the party in Delta State even as he made an unsuccessful effort to unite the APC tendencies in the state.

It will be recalled that on 29 August 2018, Dr Uduaghan officially announced his defection to APC, boasting that he was like John the Baptist who was the forerunner of Jesus Christ, a statement interpreted by many to mean his cousin, former Gov Ibori was to follow suit.