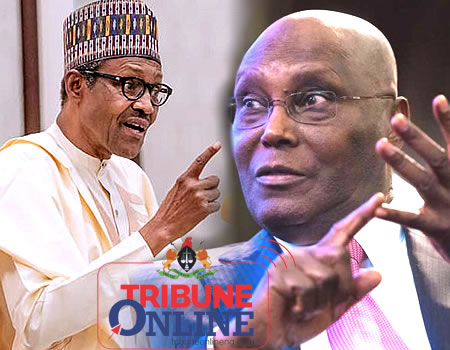 The Supreme Court on Wednesday dismissed the 66-grounds of appeal filed by the presidential candidate of the Peoples Democratic Party (PDP) in the February 23, 2019 presidential election, Alhaji Atiku Abubakar and his party against the judgment of the Presidential Election Petition Tribunal which affirmed the election of President Muhammadu Buhari.

The seven-member panel of Justices of the apex court, headed by the Chief Justice of Nigeria (CJN), Justice Ibrahim Tanko Muhammad held, in a unanimous judgement that the appeal challenging the tribunal judgement over Buhari’s election victory lacked merit and was consequently dismissed.

The CJN, who delivered the judgement held that: “Having examined all the briefs and exhibits in this matter, we all have agreed that there is no merit in this appeal.

“Appeal is hereby dismissed, reasons to be given on a date that would be announced,” the CJN stated.

Counsel to the appellants, Dr. Livy Uzoukwu (SAN), while adopting the briefs filed on behalf of his client earlier, urged the Supreme Court to reverse the judgement of the tribunal on their petition, on the ground that Buhari, the second respondent is not educationally qualified to contest the election.

He said Buhari failed to respond and give any explanation between: “The first name of the second respondent, which is Muhammadu and the first name appearing on his R19 and R21, which is Mohammed. There is absolutely nothing on record to explain the difference.

Uzoukwu submitted that the lower court speculated on the issue that the second respondent is Mohammed without credible evidence, no pleading and no affidavit, adding that none of the witnesses called by the second respondent gave evidence of ever sighting any of his certificates, whether original, photocopies or certified true copies.

On issue seven, Uzoukwu said INEC denied that it has no server, it did not call any evidence, where did INEC store card reader data, saying that INEC failed to establish where they stored card reader data and also PVC data.

“These are stored in a computer which has a storage device and also a server,” he said and added that one of the Justices of the tribunal gave a dissenting judgement to the effect that INEC has a server.

He said Section 52 of the Electoral Act 2010 which INEC contended that electronic transmission of election results is prohibited had been amended and replaced by another provision in 2015.

But INEC, through its counsel, Yunus Ustaz Usman (SAN) told the court that the electoral body has no server and did not transmit election results electronically and added that Atiku and his party has failed woefully to prove that they scored majority lawful votes cast at the election.

“Out of 191, 000 polling units in the federation, the appellants called only five polling units agents to prove that they scored the lawful majority votes cast at the election.

“By the requirements of the law, a polling agent must be called to testify in each of the polling units across the country. The failure to call witnesses from all the polling units is vital to the case of the appellants.

“On the issue of server, which they said we have, we don’t have server. Neither had the appellants proved that we have the particular server they have created in their mind after the election titled, www.factsdontlie.com, through which they claimed election results were transmitted.

“Until the Electoral Act is amended. INEC doesn’t have the powers to transmit election results electronically,” the senior counsel submitted and prayed the court to dismiss the appeal with substantial cost.

Adopting the briefs of the President, Chief Wole Olanipekun (SAN), who represented him prayed the court to dismiss the appeal which he said, ought not to have been brought before the court.

Olanipekun said explanations were given on the name “Muhammadu” and Mohammed”, which one of the witnesses, who had been with Buhari for over 30 years told the court that there is no difference between the two names.

He said the constitution does not make it a requirement for a candidate in an election to attach certificates to Form CF. 001, and added that Buhari attached all the necessary documents to the form he submitted to INEC.

In his own submissions, counsel to the All Progressive Congress (APC), Lateef Fagbemi (SAN) said the petition of the appellants was innocent on the crucial averment in the difference of names of the second respondent and added that Buhari is qualified to contest the election.

After listening to submissions of counsel in the matter, the seven-member panel, comprising of Justices Bode Rhodes-Vivour, Olukayode Ariwoola, John Inyang Okoro, Aminu Sanusi, Ejembi Eko and Uwani Aba-Aji, with the CJN presiding held that the appeal lacked merit and consequently dismissed it.

Atiku and his party had, in their appeal prayed the court to upturn the declaration of Buhari by the Independent National Electoral Commission (INEC) as the winner of the February 23 presidential poll.

Atiku and PDP’s appeal was predicated on 66 grounds in which they urged the apex court to set aside the decision of the tribunal in its entirety on grounds that the tribunal erred in law in arriving at a conclusion that the petitioners failed to prove their case against the respondents including the INEC, Buhari and the All Progressive Congress (APC).

They hinged their case on grounds that Buhari lied on oath in his form CF. 001 submitted to INEC to aid his clearance for the presidential election and also alleged irregularities and substantial non-compliance with the Electoral Act and Guidelines during the election.

The appellants, while claiming that the Justice Mohammed Garba-led tribunal erred in law by holding that Buhari was eminently qualified to contest the election, accused the tribunal of descending into defending the cause of Buhari in the petition.

They specifically accused the Justices of the Court of Appeal who sat at the tribunal of making use of evidence never pleaded/led at the trial by any of the respondents and sometimes credited statements to the respondents’ witnesses which were never made.

The appellants further argued that INEC did not lead evidence wherein it informed the Court that it was satisfied with the qualification of Buhari.

Also Buhari, according to them throughout the trial did not lead any evidence to show that he successfully went through Primary School, Secondary School and famous Military College(s) in the USA, UK and or India, whereas the lower court assumed he did.

In ground one of the appeal, Atiku and PDP submitted that the Justices of the Court of Appeal erred in law when they relied on “overall interest of justice” to hold that Buhari’s documents were properly admitted in evidence.

According to the appellants, the said documents which bordered around his certificates were neither pleaded nor front-loaded.

On ground two, relating to the ruling of the tribunal that Buhari does not need to attach his certificates to his form CF 001, the appellants submitted that the tribunal gave restrictive interpretation to Section 76 of the Electoral Act 2010 (as amended) in order to exclude Form CF001 from its provisions.

“The lower court held that Buhari passed with credits in English Language, Geography, History, Health Science, Hausa and a pass in English Literature in 1961 by inference when there was no evidence throughout the trial and indeed no evidence from the school principal to the effect that the 2nd respondent wrote or actually passed those subjects,” they argued.

In addition, they accused the tribunal of attaching evidential value to the military statement on Buhari’s certificate in making a case for Buhari after rejecting the same document for lack of probative value.

But the appellants submitted that they led sufficient evidence before the lower court to prove that Buhari lied concerning the schools he purported to have attended and certificates obtained.

The appellants also faulted the tribunal’s position on use of smart card reader on grounds that the prohibition on the use of electronic voting contained in section 52(1) (b) of the Electoral Act, 2010 was amended and deleted by the Electoral (Amendment) Act, 2015, Government Notice No. 26 of 31 March 2015, Federal Republic of Nigeria Official Gazette.

On the issue of not calling relevant witnesses, the appellants said the onus was on Buhari to prove or establish his assertion that the certificates he listed in Form CF001 filled and submitted to INEC were in fact with the Nigerian Military Board, especially in the face of the denial by the Nigerian Army vide exhibits P24 and P80.

“The appellants had no responsibility to call the then Director of Army Public Relations, Brig. Gen. Olajide Laleye.

“Exhibit P80 is the video recording and transcripts also tendered wherein the then Director of Army Public Relations, Brig. Gen. Olajide Laleye denied the claim of the 2nd respondent that his certificates were with the Army. The said the video was played in open court.

“Brigadier General Olajide Laleye was very clear in exhibit P24 (Same as R23) in his statement that neither the original copy or CTC nor Statement of Result of the 2nd respondent was found in his file.”

They also submitted that the lower court failed to see that it is not only a polling agent or an official of INEC that can examine EC8As, EC8Bs and EC8Cs in respect of the eleven (11) focal states in order to determine who scored the majority of lawful votes cast at the election.

“The lower court failed to appreciate that ground 1 of the petition is that the 2nd respondent was not duly elected by a majority of lawful votes cast at the election and the facts in support of this ground are fully pleaded in the petition and supported in the evidence of PW60.”

According to them, the tribunal failed to see that the appellants pleaded various instances of non-compliance as well as corrupt practices that substantially affected the result of the election and argued that the evidence of the 62 witnesses called by them were not controverted by the respondents.

They, therefore, asked the apex court to allow the appeal and set aside the Judgment of the Court of Appeal, delivered on September 11, 2019, in their petition numbered: CA/PEPC/002/2019.

They also prayed the court to grant all the reliefs sought in the petition and declare them the winner of the February 23 presidential poll or in the alternative annul the victory of Buhari and ordered for a fresh election.