OLALEKAN OLABULO, in this piece, reports the apprehension of Lagos residents over the increasing rate of fatalities as a result of unlatched containers falling off trucks which have led to the deaths of unsuspecting passers-by or commuters.

For residents, these are not the best of times in Lagos. More and more people in the state are getting visibly worried and apprehensive on the alarming rate at which innocent lives are terminated as a result of accidents from unlatched containers in different parts of the state. In the last one month, five people tragically lost their lives and many others injured in similar circumstances, which involved unlatched containers aboard trucks falling on commuters while injuring some and ending the lives of others.

Though truck drivers have blamed the rising cases of fallen containers on the deplorable condition of the roads in Lagos, investigations by traffic and law enforcement agencies have revealed that many of the truck drivers prefer not to have their containers twist-locked or latched because they feel safer in such situations.

On August 22, 2020, tragedy struck when a container fell off a truck and crushed two young women at Odo-Olowu Bus Stop, Ijesha, along Oshodi-Apapa Expressway.

It was gathered that the incident occurred at about 10.45 p.m. Some emergency responders who arrived the scene took the corpses to the morgue. Dr. Femi Oke-Osanyintolu who is the Director-General of the Lagos State Emergency Management Agency (LASEMA) while confirming the sad incident stated that “sadly, two adult females lost their lives and their remains have been transported by the State Environmental Health Monitoring Unit (SEHMU) to the mortuary.”

It was also gathered that the truck, loaded with an empty 40-foot container, suddenly lost its brakes and rammed into a stationary truck, with the container eventually falling off. The driver of the ill-fated truck was rescued by LASEMA personnel, who took the injured man to a hospital.

Also, two officials of the Federal Airport Authority of Nigeria (FAAN), 27-year-old Chidinma  Ajoku and his colleague, Chima Nnaekpe were on July 26, 2020 returning home after the day’s work when they were crushed by an unlatched  container which fell from a truck. The driver of the commercial bus, which was conveying Chidinma and his colleague also died on the spot, while three other occupants sustained high degree injuries.

The driver of the truck, who was later identified as Wasiu Olalekan fled from the scene of the accident but was later arrested alongside the owner of the truck, Okanlawon Sadoq. They have remained in police custody since their arrest.

The state police boss, Hakeem Odumosu, while speaking on the incident said  “On 26/7/2020 at about 1800hours, two trucks carrying containers were coming from Oshodi/Apapa expressway inward Mile Two on high speed; and on getting to llasamaja Bus Stop, one of the trucks lost control and fell on a commercial bus.

“Two persons died on the spot while three others sustained various degrees of injury. The casualties were rushed to the General Hospital, lsolo, for treatment while the corpses were deposited at Yaba mortuary for post mortem examination.”

The Lagos commissioner of police also added that “one of the victims died while on admission and the remaining two are still receiving treatment. The three deceased persons are Chima Nnaekpe, Chindinma Ajoku, both passengers of the bus and Daniel Okwoje, the bus driver.” 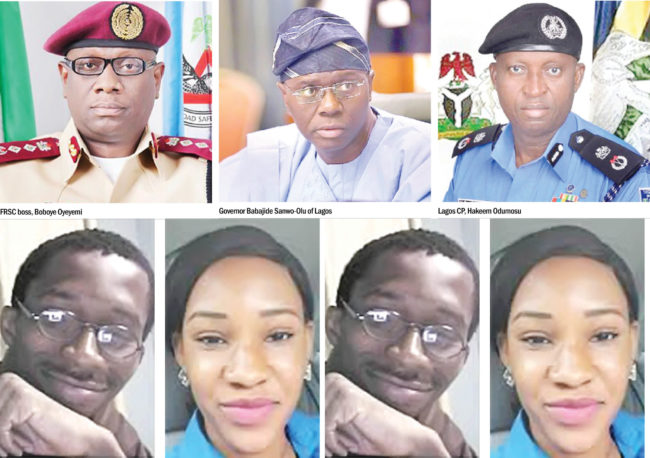 According to the police boss, “the truck driver, Okanlawon Sodiq, male, who fled the scene of the accident, was arrested by a team of detectives from Ilasamanja division on 07/08/2020.”

He also added that “The truck owner, Wasiu Lekan, male, was equally arrested for operating an unlatched container on a truck. The suspects will be prosecuted.” He cautioned that “let me again warn operators of containers to comply with safety rules especially latching their containers or face the full weight of the law.”

Drivers and passengers in different parts of the state have continued to express fears over the increasing conveyance of unlatched containers on trucks in all parts of the state and therefore called on the state government to urgently find a lasting solution to the problem, which according to them “is more serious and dangerous than how the government sees it.”

A commercial bus driver, who simply identified himself as Oguntade told the Nigerian Tribune that “container trucks have become a real menace on our roads more than ever. The rate at which containers are falling off trucks has increased tremendously and more lives are being lost.”

‘As commercial bus drivers, we abandon the road when we see trucks approaching’

The driver added that many of his other colleagues are now forced to abandon the road when they see a stretch of container-laden trucks. “The passengers will not even allow you to concentrate any longer. They want you to abandon the road for any container truck around you, even when you are not on the same lane with them. The irony there now is that there are more and more container trucks every day.”

Oguntade, however, said “drivers, who are usually lawless, should not only bear the blame. The government should also be blamed for the condition of the roads. If the roads are in good condition, there would be lesser rate of unlatched containers falling off and killing passers-by or commuters. Apart from few cases of recklessness from drivers, most of the accidents are caused by bad roads.”

Another driver, who simply identified himself as Dada said “the government should do something very fast because incidents of falling containers are becoming   more serious and killing more people than ever. You can imagine a bus stop along the Lagos-Abeokuta expressway, Obadeyi, where cases of falling containers occurred at least four times in a week.

“The government has not done anything on that road for more than a year now despite reported cases of people dying. Almost on a daily basis, containers fall on the road and people are quick to blame the truck drivers for not latching their containers. The bad state of the roads is the major cause of the fallen containers. It is worrisome.”

‘What are the security agents doing?’

A resident, Mr. Bayo Ogun, told Nigerian Tribune “this cannot be allowed to go on. Is there no government? Don’t we have regulatory agencies saddled with the responsibility of ensuring that these truck drivers do the right time? But government and its agencies have not been doing enough. Why should residents be subjected to these very unwholesome occurrences? It is appalling. Our roads are bad. They are in a very critical state. Also take a very good look at the trucks being allowed to ply the bad roads. These trucks are also in a very bad state. Yet they are allowed to ply the roads while they attach unlatched containers on them. The truck drivers are equally reckless. They drive at alarming speed while they know that their containers are not latched. It is clear that commuters or passers-by would pay with their lives when these containers fall off.

“The government must wake up. What manner of government are we running? How do you console the loved ones of the dead? These deaths are needless; they need not have occurred in the first place.”

Jude Ozomena, a businessman in the state, told Nigerian Tribune of the fear among commuters. “Any right thinking person should be scared when a truck conveying a container is approaching on the road. It is because we do not have those who are saddled with this job been held responsible when the accidents occur. It is very sad. Has life become so cheap in this country? Shouldn’t the security agents arrest these truck drivers who unlatch their containers? Must the security agents wait before another container falls on someone else leading to death before they do what is needful? It is absolutely avoidable,” he said.

‘We should be all the worried’

Mrs. Kemi Adepitan, another resident, wondered why the needless deaths should go on. Speaking with the Nigerian Tribune, she argued “Don’t we value human lives any longer? Instances of unlatched containers falling off trucks and crushing victims have been happening for a long time. Do you know that Lagos alone has the highest number of trucks with containers in the country? This is understandable considering the state been the commercial nerve centre of the country. We must do something drastic. This must stop. What if the buses were conveying school children in large numbers and this happened? It would be a crisis of unimaginable proportion. Our roads are bad; our law enforcement agents are not up and doing. The government is also not living up to expectation. Where then do you go? We should all be worried. Today, the trucks have become a nightmare on our roads in Lagos. ”

Worried by the rising cases of such accidents in recent time, the Lagos State sector commander of the Federal Road Safety Corps (FRSC) has launched a scheme tagged ‘Operation Scorpion’ which is aimed at not just enlightening truck drivers on the need to twist-lock containers attached to their vehicles but to also arrest those who violate the twist-lock enforcement.

A source in the Federal Road Safety Corps (FRSC) who pleaded anonymity, while speaking with the Nigerian Tribune said “some of these drivers prefer not to use the twist-lock because of any eventuality of accident. When their vehicles are twist- locked, they die and have high degree of injuries because the truck and the container would fall off together.

“But when they don’t use their twist-lock, only the container falls off in the event of an accident and they usually get unhurt in most of the occurrences. If you look at all the unlatched container accidents, hardly would you find any fatality involving the truck driver and his motor boy.”

The Lagos State commissioner of police, while reacting to the careless attitude of truck owners and drivers which often leads to loss of lives and in many cases permanent disability to law abiding residents, said that it is an offence to drive with an unlatched container in the state.

It was gathered that collaborative efforts by the Lagos State government, Nigerian Ports Authority (NPA), the Federal Road Safety Corps (FRSC), truck owners and security agencies have been put in place in the state to checkmate the upsurge in the rate of unlatched container – related accidents.