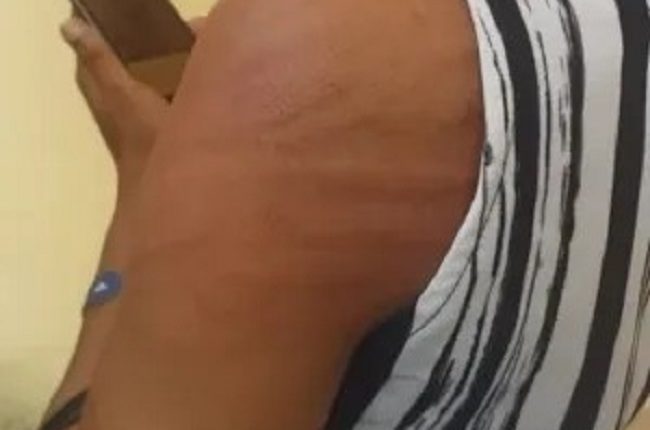 The Management of the Nnamdi Azikiwe University Awka, Anambra State, has vowed to sanction the lecturer, who allegedly beat a female student, for not wearing Ankara to the classroom.

Tribune Online gathered that a student of the university was left with swollen and bleeding skin after she was allegedly beaten by a lecturer.

The student, who is in the Economics Department, was allegedly beaten by a male lecturer because she didn’t wear Ankara to class.

A female voice, possibly a classmate of the victim, was heard in a video that has gone viral, speaking in the background of the clip to narrate what happened.

The assaulted female suffered laceration and bodily injuries on her arm and back as a result of the beating.

Another student, the one who shared the video online, revealed that the lecturer seized her own slippers because she did not comply with the dress code they were asked to wear to class.

Speaking on behalf of the School Authority, the Dean Faculty of Social Sciences, Professor Uche Nwogwugwu, said the lecturer would not go unpunished if found guilty of the allegation.

“Actually the University under the leadership of Professor Charles Esimone, as the Vice-Chancellor, has a law that prohibits indecent dressing in the school premises, but the lecturer or any staff of the University has no right to beat any student whatsoever without permission from the school authority”, the Dean of Students said.

“I have sent someone to go and investigate the matter, and if the information is true, I trust the VC, the lecturer will face the bad side of his action. We need to find out why the female student was beaten for not wearing Ankara to the classroom.

“I am assuring the public that the University will continue to leave no stone unturned in protecting the welfare of students in respective of ethnic or religious placement, the Dean assured.

He said the summit, hosted by the Faculty of Social Sciences, is aimed to discuss how to put an end to the security challenges confronting the country.

CLAIM: A Facebook user claims that the consumption of rotten tomatoes, popularly known as Esa in South-West Nigeria, can cause liver cancer.UNIZIK to sanction lecturer who tortured female student for not wearing Ankara