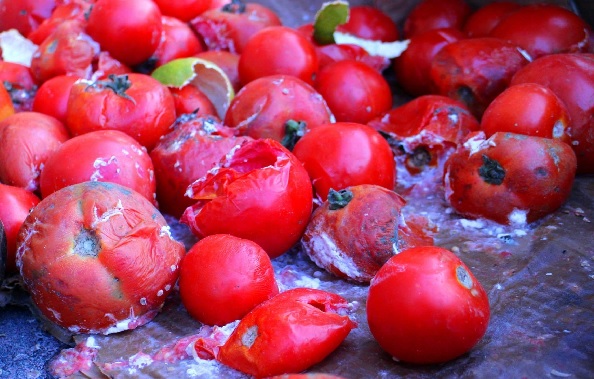 It reads: “Share with others who buy spoilt tomatoes. Spoilt tomatoes (what Yoruba called Esa) contain a fungi that produces a toxin that may cause liver cancer. Don’t buy it because it is cheaper.

“Note: Boiling and frying doesn’t completely remove the fungi. The fungi is known as Aspergillus while the toxin is known as Aflatoxins. Kindly inform others.”

Over the years, there have been warnings on how these rotten tomatoes are dangerous to health when consumed.

In 2018, the National Agency for Food and Drug Administration and Control (NAFDAC) warned Nigerians against the consumption of rotten tomatoes, to prevent cancer.

Christiana Essenwa, a Deputy Director at the Agency who issued the warning, said rotten tomatoes contain microorganisms that induce cancer.

In her words: “Some people think that rotten tomatoes, which are cheap, can be consumed after washing and heating, stressing that the toxins could not be washed or killed by heating since they are heat resistant.”

A visit to some popular markets in Ibadan, Oyo State shows that many consumers still prefer rotten tomatoes.

Some of the traders and buyers who spoke to Dubawa explained that rotten tomatoes are quite cheaper than fresh tomatoes, adding that the rise in the price of fresh tomatoes had led to an increase in the preference for rotten ones.

A buyer at one of the markets, simply identified as Mariam, said: “Because of the increase in the price of fresh tomatoes, I now buy Esa, it is cheaper and higher in quantity.” When asked if she is aware these tomatoes are harmful to her health, she replied: “I wash them thoroughly and boil them for a long time.”

A tomato seller also attributed the increase in consumer’s preference for rotten tomatoes to the hike in the price of fresh ones.

Dubawa then conducted a keyword search on the fungi, aspergillus and toxin, aflatoxins.

According to Centres for Disease Control and Prevention (CDC), aspergillus is a common mold (a type of fungus) that lives indoors and outdoors.

The CDC explained that most people breathe in aspergillus spores every day and it is probably impossible to avoid breathing in the fungi spores. This is not harmful to those with strong immune systems except people with weakened immune systems or lung diseases who are at a higher risk of developing health problems due to aspergillus. The types of health problems caused by aspergillus include allergic reactions, lung infections, and infections in other organs.

The CDC says there are approximately 18 aspergillus fumigatus is the most common cause of human aspergillus infections.

The World Health Organisation (WHO) defined mycotoxins as toxic compounds that are naturally produced by certain types of moulds (fungi), these moulds produce mycotoxins that grow on a variety of different crops and foodstuffs such as cereals, dried fruits, nuts and spices.

According to the World Health Organisation, aflatoxins are amongst the most poisonous mycotoxins which are produced by certain moulds; aspergillus flavus and Aspergillus parasiticus, that grow in soil, decaying vegetation, hay, and grains. Crops that are frequently affected by aspergillus species include; cereals (corn, sorghum, wheat and rice), oilseeds (soybean, peanut, sunflower and cotton seeds), spices (chilli peppers, black pepper, coriander, turmeric and ginger) and tree nuts (pistachio, almond, walnut, coconut and Brazil nut).

The WHO also warned that the health effects of mycotoxins range from acute poisoning to long-term effects such as immune deficiency and cancer. Large doses of aflatoxins can lead to acute poisoning (aflatoxicosis) and they can cause liver cancer in humans.

A nutritionist, Favour Akinpelu, said that consuming rotten tomatoes may increase the risk of liver cancer, adding that rotten tomatoes truly contain aflatoxins which are indeed damaging to the health.

She said boiling and frying does not remove the fungi completely as consumers think.

“Those white things found in rotten tomatoes are called aflatoxins which are indeed harmful and poisonous to humans. The effect of consuming this fungus may not happen immediately, it accumulates in the body and shows up later causing illnesses.

“Some people think boiling and frying remove the fungi completely, but this is false. It is advisable to eat clean and healthy food that serves nutritional values,” she said

He, however, advised that it is safer to consume fresh foods to avoid health complications.

Why mixing toilet cleaner with bleach may cause death