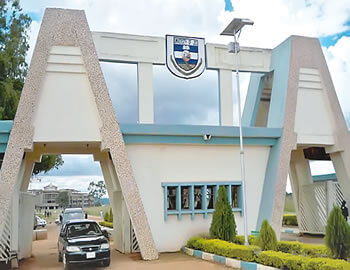 The University of Jos has relocated its administrative block/Senate Chambers to the permanent site of the university after 44 years of existence of the institution.

The News Agency of Nigeria (NAN) reports that the university, which was established in 1975 had its administrative/Senate Chamber in its temporary site at the Bauchi Road Campus.

The multi-million structure, which was started in May 2009 by Prof. Sonni Tyoden, the then Vice-Chancellor and current Plateau Deputy Governor, is ready for use by the university after 10 years.

“This is indeed historic because the award and construction of this project dates back to 10 years.

“I never knew that this project will end but history has beckoned on me to be part of this project.

“This is one project I thought I will not be able to do anything about but faith and determination kept pushing me.

“In trying to reach where we are today, I have cause to push the consultants and everybody involved in this project,” he said.

The VC stated that he could not remember the number of times officially and unofficially that he had inspected the project within the period he had been in office.

He thanked the members of the management and staff, who resolutely stood by him to achieve the feat.

He also commended the contractors and consultants for keeping the faith and working on this project for 10 years.

Maimako equally commended that Directorate of  Physical Facility of UniJos for working with contractors and consultants within the period.

Prince Tony Momoh, Pro-Chancellor and Chairman of Governing Council of the University, commended Prof. Maimako and his team for completing the project.

Momoh who was represented by Mrs Phenomena Mutbang, Member of the Governing Council, said that posterity would judge Maimako kindly.

Halima Auta, Director,  Directorate of Physical Facilities,  who gave the scope of edifice said that the building was a three-storey building with wings X, Y  and Z.

Auta said that the building housed the Office of the Vice-chancellor, 400 seating capacity Senate Chamber, 300 offices and two committee rooms, which can take 30 people each.

She added that the external works consisted of drives and parking lot,  100 KVA generator, a transformer and a solar-powered water farm.