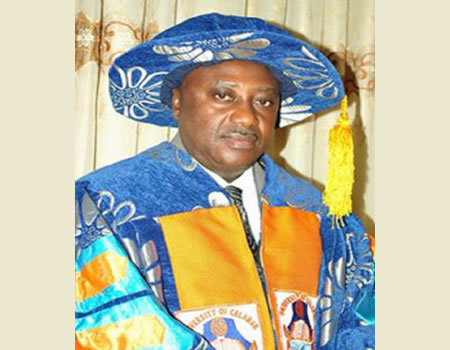 The University of Calabar (UNICAL) has restated its resolve to collaborate with intellectual societies on the promotion of academic excellence.

Prof Akpagu said the collaboration is one of the cardinal objectives of the institution aimed at promoting academic and intellectual excellence.

The Vice-Chancellor said the institution was already promoting academic excellence by encouraging useful and beneficial exchange of ideas through conferences, seminars and workshops.

According to him, the theme of the conference was apt following the economic recession currently bedeviling the country.

He thanked NSBMB for giving Unical the hosting rights of its 2nd Zonal conference and promised to support them.

The Vice-Chancellor, however, expressed joy that NSBMB was at the verge of assuming the status of an institute, saying it will confer on them the legal status for regulating and controlling their profession.

He also commended the local organising committee for organising the event and urged them to attract the national conference of NSBMB to Unical.

This is even as he congratulated the University of Ilorin for topping the ranks of Nigerian Universities and thanked them for providing the leadership for NSBMB.

Also speaking, National President of NSBMB, Mrs Sylvia Malomo thanked the Vice-Chancellor for providing an enabling environment for the conference.

She also applauded the Vice-Chancellor for his developmental strides in the institution, stressing that the institution has witnessed tremendous transformation since he assumed office.

Malomo commended the South-South and South-east zones of NSBMB for its consistency in promoting the activities of the society.

The NSBMB President also commended the South-South Zonal Coordinator, Prof Friday Uboh for working assiduously to promote the activities of the society, describing him as a go-getter.

In his remarks, South-South Zonal Coordinator of NSBMB, Prof Friday Uboh thanked the Vice Chancellor for his support towards the hosting of the conference.

He also commended members of the local organizing committee, staff and members of Biochemistry Department of the University of Calabar for their tireless efforts in making the zonal event a reality

The Zonal Coordinator reminded fellow Biochemists that NSBMB is the first and primary society of their own before any other academic society hence the need for them to fight and protect their profession from oppression by other professional bodies.

Prof Uboh disclosed that the struggle to take the society to the status of an institute at the national level has become a reality, adding that it is a thing of joy that this dream is being fulfilled in their time.

He, however, appealed to all Biochemists to be committed to regular payment of dues and participation in all zonal and national conferences.

The Zonal coordinator urged senior colleagues to rise up to their expected responsibility of mentoring the younger ones to become eminent Biochemists.

He solicited for financial support from public spirited individuals and eminent scientists to help in the sustenance of the zonal event on a yearly basis.

Delivering the keynote address, National Secretary of NSBMB, Prof Musa Yakubu described Biochemistry as a unique profession which cuts across all fields of human endeavor.

Prof Yakubu who spoke on the title- the role of Biochemistry and Molecular Biology in a recessed economy said Biochemists can contribute immensely in pulling Nigeria out of its present economic woes by diversifying the economy through increase in production of agric produce.