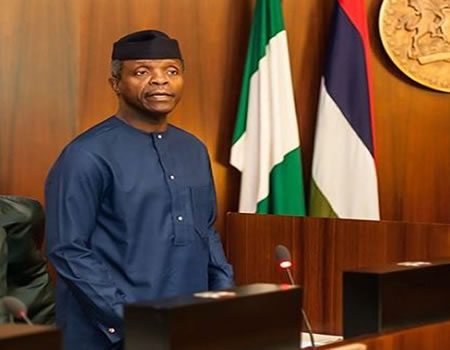 ACTING President Yemi Osinbajo on Thursday joined members of the Federal Executive Council, Permanent Secretaries and heads of Ministries, Departments and Agencies (MDAs) in a retreat on the Implementation of the Economic Recovery and Growth plan (ERGP).

The retreat with the theme “Building Synergy For Effective ERPG Implementation,” which took place at the Conference Centre of the Presidential Villa, Abuja also deliberated on the 2018 budget preparation process.

Minister of Budget and National Planning, Udoma Udoma, told State House correspondents at the end of the exercise that it was basically about the ERPG with link to the 2018 budget implementation.

He said: “It was basically about the ERGP and preparations for the 2018 budget and linking the plan with the budget and we will be briefing cabinet members about the linkages between the plan and the budget.

“Basically we have to keep on reviewing at every stage. So, this is review where we are, what needs to be done and what steps we need to take in areas that we need to fast rack.

“We need to review what we are doing at the stage of implementation. So this was the purpose of the meeting.”

He added that government was moving ahead in terms of the modalities that have been defined.

While noting that it was not the time to actually say what stage government was on, Udoma noted that the newly approved Medium Term Expenditure Framework (MTEF) would be submitted to the National Assembly when the lawmakers return from their present break.

He stated: “National Assembly is on break so nearer the time they will resume in September but ours is to follow the Fiscal Responsibility Act which has some timelines and we are trying to keep strictly by those timelines.

“So, the budget will get to the National Assembly by October. That was our commitment.

“We will go all out to make that happen. We made a commitment that we will do that on our part and we intend to deliver on that commitment.

“This is a government that delivers on its promises.”