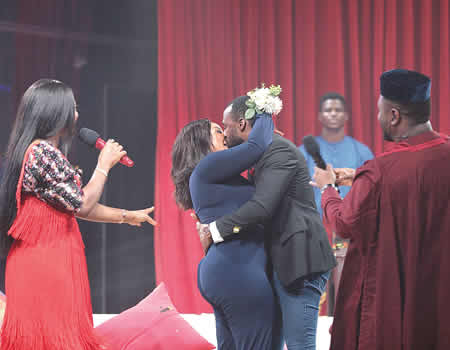 ROTIMI IGE writes on the recently concluded dating reality TV show, Ultimate Love, how the show has affected viewers and their perspectives on matters of the heart.

The dating reality show, Ultimate Love came to an end on Sunday and the fans favourite couple, Roksie (Roskie) emerged the winners of the first season organised by Multichoice, owners of the DStv and Gotv brands. The duo were crowned the ultimate couple during the show’s finale on Sunday.

It followed 16 random contestants (half of each gender) in a secluded ‘love pad’ for seven weeks under 24-hour surveillance until two contestants were declared the ‘Ultimate Couple’. Roskie beat other finalists, Iykeresa, Bolar, Double Chris and Chivia to the grand prize.

Rosie, a primary school teacher and Kachi, an enterprenuer, by winning, walked away with a cash prize of N5.150 million, gifts, N10 million sponsored traditional wedding and a house if they eventually get married.

However, the prize came with a clause, there has to be a commitment from the couple on the live show and a proposal within the first 90 days. To this end, Kachi popped the question to Rosie at the live finale show on Sunday night, and she said yes.

The show, in its first season, has in the past seven weeks become fans’ favourites, keeping audiences around the continent glued to their screens. It captured the hearts of many, with fans forming opinions and teams regarding which couple to support. It premiered on February 9, with Dakore Egbuson-Akande, a Nollywood actress, and Oluwaseun Olaniyan, a Nigerian creative director, as its hosts.

The goal of the show, is to find love, which is encouraged to lead to marriage. And so, a total of 23 individuals (18 at the beginning of the show) were introduced into the house and instructed to bond as soon as they entered the love pad.

The first few days were characterised by speed dates where the love guests were tasked to know much about one another, forge relationships, complete challenges set out for them  and ultimately pursue a choice partner for a celebrity wedding. After the speed dating exercise, couples emerged, which signaled the beginning of an intriguing season.

The couples  were not left alone. They were to be guided by Aunty, a pivotal figure played by Adesuwa Onyenokwe, the editor-in-chief of TW magazine and host of TV show, TW conversations on Africa Magic. She was expected to bring her wealth of experience as a prominent and respected voice on topical issues like relationships, health and wellness and this she did just that throughout the duration of the show, such that the couples grew very fond of her and looked forward to her visits to the love pad. The couples also had mentoring sessions and received messages from home at specific times to help them navigate their time and relationships in the pad.

Each week, viewers got to decide on their favourite contestants/couple. The nominations, done by love guests where each couple was required to select two other couples to be checked out, brought a lot of drama and misgivings in the love pad. The couple with the highest number of nominations thus became up for evictions. Two couples with lowest nominations in the check out list were offered redemption via a Monday morning challenge, after which ‘Aunty’ would save the more deserving of the two. At the end of the week, the contestants with the least votes were evicted from the show.

Fans of the show, during its entire duration, had a lot to say in various conversations and took to social media at every opportunity to express themselves. It was little wonder that the show trended on twitter for seven weeks.

As observed by Friday Treat, within a few weeks, each couple developed their unique fan base. Names like Iykeresans, BolARMY, Roksie nation etc became a norm and each defended the actions of their favourite pair with passion.  Speaking with Friday Treat, a fan of the show, Mrs Nkechi Sunday, a banker, said that she was impressed by the idea behind the show, stressing that it would most likely encourage love in most homes.

“I am happy with the show. Trust me I have learnt a lot, especially during the Thursday mentorship classes. I made sure I recorded all the classes so I could watch later, after work. The couples session with Aunty was also very expository. Watching real life situations made  me realise many things in my own marriage; tolerance, perseverance etc. I really love the show,” she said.

Another respondent, Mukaila Adamu, an entrepreneur from Kaduna, said that the show was just what his family needed when he and his newly wedded wife were passing through a rough patch in their relationship.

He said, “I wasn’t watching initially but my wife would always refer to one Jay that I was acting like him in our home. She said I was rigid like Jay. That got me interested in the show and so I began to watch. I later observed the said character and realised that he was accused of not being able to express love without some form of push from his partner. I decided to ask my wife to tell me some of the things she would want me to improve upon because we are newly weds. I believe that with time, I will be a better husband and I have learnt a lot watching Ultimate Love, I also wish JayKech all the best in life.”

Christine Adewale was eager to tell Friday Treat, during a whatsapp chat about her wish to love again after a recent heartbreak which left her a shadow of her former self.

“I was devastated when my former boyfriend left me after giving the relationship of four years my all. I was bitter for months and vowed never to love any man with my heart anymore. But I think Ultimate Love may just have changed that. Rosie gave me the courage to do that. Bolanle and Chris too. I appreciate how they were able to open themselves to new people and give love another chance. I will see what happens with me too,” she said.

Chief executive officer, MultiChoice Nigeria, John Ugbe, while talking about the reason for the show, said, “Reality TV shows are immensely popular because they showcase real people experiencing real life happenings and situations, thus connecting with viewers and fans on a personal and relatable level.

“There are fewer things realer than love, and Ultimate Love, our new and exciting reality show, celebrates this. We are excited to have developed this new reality TV format which further reiterates our position as Africa’s biggest storyteller and custodians of premium and quality entertainment in Africa. Our viewers can always expect the very best production values and a show experience unlike anything ever seen on African television,” he added.

And so, while the continent waits for Kachi’s final proposal, which must be done within the next three months, the question on everyone’s lips is, “Has Rosie found her ultimate love?”

Race to ‘Access The Stars’ finals intensifies, as three contestants are evicted