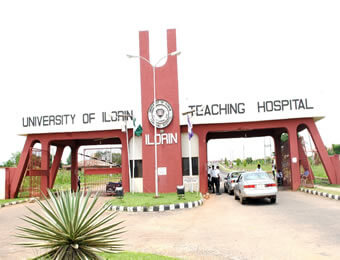 JOINT Health Workers Union (JOHESU) of the University of Ilorin Teaching Hospital (UITH) has planned a seven-day warning strike action from this week Thursday to protest against alleged poor staff welfare and working conditions in the institution.

Meanwhile, the management of the institution in its reaction through Director of Administration, Mr D. S Odaibo, said that the management was aware of the issues raised, adding that it would address them when their revenue improved and when approval was received from the Ministry of Health.

The placard-carrying workers, who staged a peaceful protest in the hospital on Tuesday, threatened to disrupt visit of the Minister of Health, Professor Isaac Adewole, who is billed to commission some projects in the institution on Saturday.

Addressing journalists, chairman, JOHESU of the UITH, Comrade Olatunde Oluwawumi, accused the outgoing Chief Medical Director (CMD) of the hospital, Professor Abdulwaheed Olatinwo, of insensitivity to workers’ plight over the years, vowing to shut down the hospital as soon as the union receives directive in that regards from the parent body.

“We wrote him about our demand two weeks ago giving him an ultimatum. We also listed our demands. We asked him to attend to lack of drugs, consumables and equipment in the hospital; payment of 2009 and 2011 promotion arrears; payment of skipping arrears.

“So now we want the Federal Government to start to audit the accounts of teaching hospitals in the country.

“We want the federal government not to choose minister of Health from any profession in the teaching hospital. During the administration of Professor Eyitayo Lambo, there was no strike at all in the teaching hospital. Because he is not a medical doctor he was fair to all. So long as the government chooses a medical doctor as a minister, problems in the Health sector will continue. If there is no response we will wait for the directive from the headquarters”, he said.

On the union’s expectation from the incoming CMD, he said: “we pray and hope that God to give us the one that has the interest of members of staff at heart; that will have mercy upon us and that will not deny us of our rights and emoluments.”

He continued: “There is no water in the hospital, no electricity supply. The hospital has the obsolete equipment. What we have discovered is that the outgoing Chief Medical Director of the hospital, Prof Abdulwaheed Olatinwo does not have the interest of the hospital at heart

“Instead of purchasing drugs and equipment the CMD prefers to be building unwanted houses. We know the reason why they are building houses, it is because of the 10 percent they will get from contractors.

“The CMD is bringing Minister of Health to this hospital on Saturday this week for the commissioning of the irrelevant structures. The man is leaving the hospital worse than he met it.

“Based on all these issues that we have raised we are doing our befitting send forth for the CMD by this protest and planned strike which commences on Thursday this week.

“We held meeting with the man yesterday but he remained adamant. He gave us the approval to go on strike. It shows the insensitivity of the chief executive.

Oyo LG Chairmen to remain in office till May 4