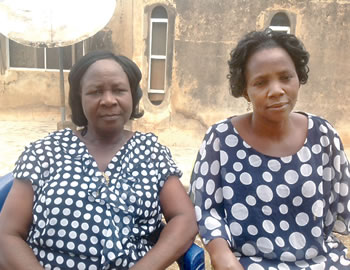 HAKEEM GBADAMOSI, who had an interaction with two jolly wives of an Akure, Ondo State-based popular Pastor, writes on how the two wives do a lot of things together in the last three decades without rancour.

Their lifestyle is unique. What others quarel over, they smile at. Their husband is a pastor in one of the very popular churches in Nigeria. They are both married to him. They live under the same roof. They are into the same business. Infact, they are joint owners of the business. They operate same account and do so many other things jointly.

Lydia and Funsho Ogundari are both legitimate wives of Pastor Alaba   Ogundari. On a daily basis,they do what a lot of people perceived to be  unusual by venturing into a common business  of running a food canteen by the  name “ Iya Henry” along Irese Road, Shagari Village, in Akure, the Ondo State capital together for over two decades without any misunderstanding or grudges.

Interestingly, the head of the home, Pastor Ogundari finds it difficult to unknot the mysteries behind the special bond between his two wives who have been living in peace in the last 30 years.

Speaking  on the special love that exists between her and her junior wife, 61-year-old Mrs. Lydia Ogundari, who said she has been married for about 40 years, explained that the hand of love extended to her by Funsho before she moved in as the second wife gave birth to the present situation in the family.

She described Funsho as a humble person with uncommon respect, that is courteous and above all, accommodating. She said, “My first encounter with her was when she got pregnant for my husband. She approached me secretly and confided in me that she has been asked to terminate the pregnancy.  I advised her against it and I called my husband to desist from such act.

“We quickly organised to meet her family and ever since she moved into this house, we never engaged in a heated argument. She is much younger than me and gives me so much respect, that people living around us usually think she’s my first daughter.  She relates with all my children very well and takes good care of them.”

The younger wife, Funsho who turned 50 recently, said though she was from a polygamous home, she had the determination since she got married  that she would be a blessing to the home, and prayed to God to give her the wisdom to live peacefully with her husband and her senior wife.

“The love that exists between me and mama is greater than what I share with my husband. She is a mother, sister, teacher and everything to me. She’s endowed with  a special ability on how to correct people. She is gentle, mild and even reciprocates the respect I give to her, making me realise always that respect begets respect,” Mrs Ogundari junior said.

While reminiscing on how the food selling business came into being, the senior wife explained that she never had any inkling that she would be involved in such business as she initially specialised in selling clothes and batik until the business went down the drain.

Lydia said, “The idea was not mine but that of the younger wife. I provided the initial capital and we started the business. Initially, our husband objected, but to God be the glory, within a little period, we were able to establish ourselves in the community and our canteen became a household name in this area.

“Since we started this business, I never for a day went to the market; the junior wife usually does all the purchases while we will cook together. Our normal routine starts by 5:30 am and by 7am, pounded yam  and other food should be ready for our customers.”

The two wives also have some things in common. While Lydia, the first wife is blessed with five children, three females and two males who are all university graduates, Funsho also has five children: two girls and three boys, with her firstborn in 200 level at Adekunle Ajasin University, Akungba Akoko.

According to  Funsho, she has been reaping the fruits of her humility saying, “ Two of my children are in Abuja, staying with one of the children of mama, who has been taking care of them for the past years; two others are in boarding schools while the last born of the house is at home with us.”

When asked how they share the profits from their business, Lydia said, “In the beginning, we were making good profit, but the present economic condition has greatly affected our business. We used to buy a bag of rice for N7,000 but we are now buying between N14,000 and N15,000. So, the profit margin is low these days. All we do on a daily basis is to save a little amount through daily contributions and monthly contributions.”

They also commended their husband for his periodic support whenever they complained about low sales. The duo said their husband has been very supportive financially and morally by encouraging them especially during the current economic downturn, and by praying for the progress of their business on a daily basis.

She said, “ When mama travelled to America to visit her daughter who put to bed, each time she called, we talked on a daily basis and if our husband visited my room, I will tell her that our husband was in my room that day.”

The two wives of the clergyman said there were a lot of things and lessons they wanted women who found themselves in their shoes to learn from them. Lydia believes that whatever has been designed by the Creator must come to pass and there was no need to turn back one’s destiny. She said though she felt bad initially but life goes on. She said, “I trust that everything happens for a reason, even when we are not wise enough to see or understand it.”

While Funsho said with trust, love and prayer, nothing seems impossible. She said, “Love  knows no limit to its endurance, no end to its trust, no fading of its hope; it can outlast anything. Love still stands when all else has fallen. I let go of the reasons that it won’t work and firmly believe it will work and ready to make sacrifices to be happily married throughout the days of my life.”

She said, “ I have been eating here for the past three years and I find this revelation  too real to believe because they are like mother and child. They hardly argue on issues relating to their business and you see them on a daily basis wearing similar dresses.”

Define and position your music and personality for music business success