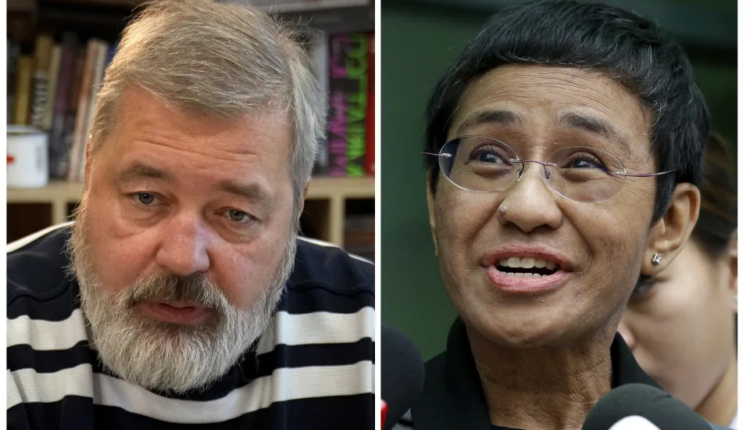 Two journalists, Maria Ressa of the Philippines and Dmitry Muratov of Russia won the 2021 Nobel Peace Prize on Friday for their fight for freedom of expression in countries where media outlets have faced persistent attacks.

The Norwegian Nobel Committee stressed that an independent press is vital in promoting peace.

“Free, independent and fact-based journalism serves to protect against abuse of power, lies and war propaganda,” said Berit Reiss-Andersen, chair of the committee, explaining why the prize was awarded to two journalists.

“Without freedom of expression and freedom of the press, it will be difficult to successfully promote fraternity between nations, disarmament and a better world order to succeed in our time,” she said.

She and Rappler “have also documented how social media is being used to spread fake news, harass opponents and manipulate public discourse.”

Reacting to the news, Ressa told Norway’s TV2 channel that “the government (of the Philippines) will obviously not be happy,”

“I’m a little shocked. It’s really emotional,” she added. “But I am happy on behalf of my team and would like to thank the Nobel Committee for recognising what we are going through.”

The award-winning journalist was last year convicted of libel and sentenced to jail in a decision seen as a major blow to press global freedom. She was the first woman to win a Nobel this year.

Muratov was one of the founders of the independent Russian newspaper, Novaya Gazeta, in 1993.

“Novaya Gazeta is the most independent newspaper in Russia today, with a fundamentally critical attitude towards power,” the Nobel committee said.

“The newspaper’s fact-based journalism and professional integrity have made it an important source of information on censurable aspects of Russian society rarely mentioned by other media,” it added.

The Nobel committee noted that since the launch of Novaya Gazeta, six of its journalists have been killed, among them Anna Politkovskaya who covered Russia’s bloody conflict in Chechnya.

“We can congratulate Dmitry Muratov — he has consistently worked in accordance with his ideals,” Peskov said in a conference call with reporters.

Reiss-Andersen noted that the peace prize has gone to journalists in the past, including Ernesto Teodoro Moneta of Italy who was cited in 1907 “for his work in the press and in peace meetings.”

In 1935, German journalist Carl von Ossietzky was awarded the prize “for his burning love for freedom of thought and expression” after revealing that the Nazi regime was secretly re-arming in breach of the World War I peace accord.

Ressa has been particularly critical also of the role of tech companies such as Facebook in manipulating public debate, and their failure to curb hate speech.

Speaking on Rappler’s site after the award was announced, Ressa said that the “virus of lies that has been introduced through the algorithms of the social media platforms, it infects real people and changes.”

Reiss-Andersen also noted the risks to free speech in today’s world due to the spread of fake news.

Media rights group Reporters Without Borders celebrated the announcement, expressing “Joy and urgency” in reaction to the news.

The prestigious award is accompanied by a gold medal and 10 million Swedish kronor (over $1.14 million). The prize money comes from a bequest left by the prize’s creator, Swedish inventor Alfred Nobel, who died in 1895.