Turkey says no intention for conflict with Russia after Idlib attack 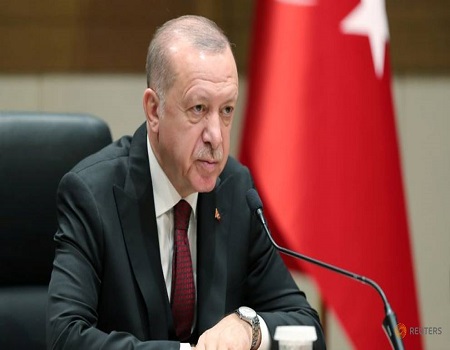 Turkey does not want a conflict with Russia, President Recep Tayyip Erdogan said on Tuesday, striking a conciliatory tone after several Turkish and Syrian forces were killed in shelling in the north-western province of Idlib.

In recent days, Erdogan has charged Moscow, which backs Syrian President Bashar al-Assad, for being disloyal to agreements in Syria as well as turning a blind eye to escalation by the Syrian government and allied forces in Idlib.

According to dpa, Ankara and Moscow brokered a ceasefire in Idlib that was violated as the Syrian army and allied forces made advances in the province.

“There is no need for us to engage in a conflict or a serious contradiction with Russia at this stage,” Erdogan told reporters on his plane returning from a trip to Ukraine.

The Turkish president cited “very serious strategic initiatives” between Ankara and Moscow, including Ankara’s S-400 missile defence systems purchase, a planned Russian-built nuclear power plant in Turkey and a natural gas pipeline project, according to a transcript on the presidency website.

Seven Turkish soldiers and one civilian died in Monday’s shelling by Syrian government forces in the embattled rebel stronghold of Idlib, Erdogan confirmed.

On Monday, the Britain-based Syrian Observatory for Human Rights said 13 Syrian soldiers were killed in Turkish shelling in Idlib and surrounding provinces. The Syrian government has not confirmed any casualties.

Ankara remains committed to maintaining a dialogue with Moscow for a political solution in Syria, Turkish Foreign Minister Mevlut Cavusoglu separately said on Tuesday in Ankara.

The escalation in Idlib is a “serious test” of the military ties between Russia and Turkey, Konstantin Kosachyov, who heads a Russian parliamentary committee on international affairs, said.

Turkish military observation posts in Idlib are of “crucial” importance and will remain, Erdogan said, adding Ankara “will not allow a new war, civilian massacre and a migration wave,” from Idlib.

Erdogan discussed on Tuesday “latest developments in Syria and Libya” in a phone call with Merkel, the presidency said.

Erdogan was also expected to talk to Russian President Vladimir Putin on Tuesday.

Syrian government forces and their allies continued their advances towards the provincial capital, Idlib city.

The Observatory said airstrikes targeted the outskirts of the city of Idlib.

Activist inside Idlib city said the sounds of heavy shelling and airstrikes are echoing across the city since the early morning.

“People in Idlib city will have no choice but to head to the Syria-Turkish border if the regime advances inside the city,” said an activist, who requested anonymity.

More than 520,000 people have been displaced in north-western Syria in the past two months, 80 per cent of them are women and children, said David Swanson, a spokesman for the UN Office for the Coordination of Humanitarian Affairs.

He said a plan is in place to address the needs of 800,000 people in the area over a six-month period, which requires up to 336 million dollars.