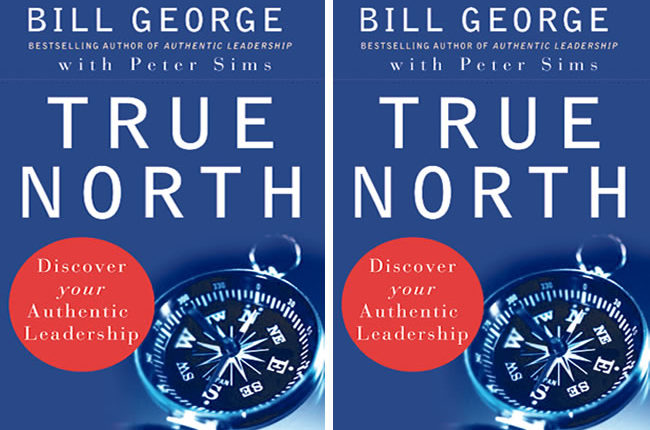 Bill George was an inspirational, high-achieving leader at the medical instrument company Medtronic, which he grew to become the world’s leading medical technology supplier. Elected CEO in 1991, he became one of the most admired CEOs of his generation as he grew Medtronic’s market capitalization from $1.1 billion to $60 billion, averaging 35 per cent a year from 1996 to 2002. He then became one of the world’s foremost teachers of leadership, as a Harvard Professor and best-selling author.

Most leaders, says George in True North (the follow-up to his book Authentic Leadership) , act the way they think a leader should act, based on leader archetypes (think Churchill, Jack Welch), or the traits, styles and characteristics that have been identified in more than 1,000 studies of leadership over the past 50 years. But, those who see leadership as emulating great leaders or acting out a set of competencies don’t truly lead, says George. You can only effectively lead by finding your authentic voice.

“In the 21st century, without authenticity in leadership, organizations can’t develop sustained growth.”

For George, leadership isn’t a job title, or a mantle that you put on when you walk into a leadership position, or a set of behaviours defined in your HR Department’s leadership competencies framework. It is the sum total of who you are.

Leadership is about what makes you different

Finding your authentic leadership is the leader’s equivalent of what the business guru Tom Peters calls ‘defining Brand You’. While most leadership theory is spent on codifying what is the same about leadership, George reminds us what the marketplace itself teaches us – sameness creates commodities, difference is what stands out.

Reminds me of my favourite quote about all leadership being autobiography: “Abraham Lincoln was once asked how long it took him to write The Gettysburg Address, the speech that defined a nation. He replied, ‘All my life’.”

There is no perfect profile of a leader

All the academic studies have failed to find the profile of a perfect leader, says George, because leaders are highly complex human beings, people who have distinctive qualities that cannot be sufficiently described by lists or traits or characteristics. Once we realise this, says George, and also realise that leadership is not a position, we can stop being bent out of shape by trying to fit into the straitjacket of leadership definitions and instead accept four liberating new laws of leadership:

The 5 dimensions of authentic leadership

Traditional leaders focus on their own success and on getting loyal subordinates to follow them to achieve that success. Authentic leaders, by contrast, inspire others to lead around a shared purpose, rather than around the leader.

This doesn’t mean authentic leaders are perfect. In fact, it is a defining feature of authenticity that you admit to your flaws rather than hide behind the mystique of the leader who can never make a mistake.

Purpose: Without knowing your purpose (why you lead) you are at the mercy of ego

Practising solid values: Integrity is the core value. If your practice slips and slides under pressure, people quickly lose confidence in your leadership

Heart: This means having passion for your work and the courage to make difficult decisions

CORRUPTION, INSECURITY: Nigeria needs a Rawlings now —NDP
NATIONA L chairman of the National Democratic Party (NDP), Chidi Chukwuanyi, says the state of corruption in the country calls for the replication of the Ghanaian experience under former President Jerry Rawlings in Nigeria. Rawlings,  known for his no-nonsense position against corruption, executed Ghana’s past… Read Full Story
Nigeria Records 438 COVID-19 Cases, Total Now 39,977
Nigeria’s tally of confirmed COVID-19 cases on Saturday rose to 39,977 as 438 new infections were announced by the Nigeria Centre for Disease Control (NCDC)… Read Full Story
Resign, Nigeria is a failed state under you, Middle Belt, others tell Buhari
DISTURBED by the unabated killings in the Southern Kaduna and other parts of the country, the Middle Belt Forum  (MBF) has called on President Muhammadu Buhari to resign or be ready to secure the lives and properties of the citizens… Read Full Story
Reintegrating ex-terrorists wrong —Adebanjo, M/belt, others
NOTABLE Nigerians, including the leader of Yoruba socio-cultural organisation, Afenifer, Chief Ayo Adebanjo, on Saturday,  played the Federal Government over the reintegration of 601 repentant Boko Haram terrorists at the weekend… Read Full Story
COVID-19: We are not in a hurry to reopen schools, Osun, Ondo, Ekiti govts say
AGAINST the backdrop of the ravaging COVID-19, some state governments in the South-West have said that primary and post-primary schools will remain shut in the face of COVID-19 pandemic. Osun State Commissioner for Education,  r Folorunso Bamisayemi Oladoyin on Saturday said the state government was… Read Full Story
El Rufai Supports Hike In Train Fare As FG Approves For N6000 Business Class
The Governor of Kaduna State, Mallam Nasir El Rufai has expressed support the Federal Government for increasing the fare on Abuja-Kaduna train service from N3,000 Business class to N6,000 and N1500 Economy… Read Full Story
Can Buhari Separate Two Chickens In A Fight?
HASSAN Ayariga, founder of the All Parties Congress (APC) of Ghana, in a recent viral video, publicly reminded Nigerians that their country had become a butt of jokes in international discourses. Right before our very eyes, Ayariga rudely poked his hands into our eyeballs. Nigerians are, however, taking the insult in their… Read Full Story
Expensive Rams: How Banditry, Insecurity Have Affected Cost Of Livestock
IT is no news that the Holy pilgrimage to Mecca this year would not happen as it has been restricted to those within Saudi Arabia. However, the killing of rams as a significant sacrifice during the annual festival would take place all the same… Read Full Story
COVID-19 Ban: Secret Service, Mobile Evangelism Take Over Lagos
The Church is one of the institutions that severely felt the impact of the coronavirus pandemic as some states are yet to lift ban on religious gatherings. Lagos, which is one of the states feeling the heat of the pandemic the most in Nigeria, fashioned out different measures to combat the deadly virus from spreading and the… Read Full Story
How Nigerian Leaders Should Be Judged —Omole, Ex-OAU VC
There is no scintilla of doubt that university education in the country is grossly and abysmally underfunded by successive administrations. Let me quickly give you some statistics so that you will not think it’s all about my imagination. In the 2018 budget, education was allocated seven per cent of the total budget; in 2019, it was 7.02 per cent and in the 2020 budget, it was reduced to 6.7 per cent, whereas… Read Full Story
Why I Won’t Disclose My Wife’s Complaints About Me —Olorunrinu
Growing up was quite very interesting. It was fun and I had very excellent and wonderful parents. They were very godly and inspired me a lot. They instilled the right morals in me and I must give them the credit. I went to a private school and I was brought up godly parents until I lost my mum when I was 16… Read Full Story
POLICAL ANALYSIS: Ondo’s Epic Rematch Of Two Silks
With the emergence of the candidates of the two major political parties in Ondo State, the Peoples Democratic Party (PDP) and the All Progressives Congress (APC) ahead of the governorship election, history will be repeating itself as two Senior Advocates of Nigeria (SANs), among other contestants… Read Full Story

Between Mushin and Ngige’s Victoria Island