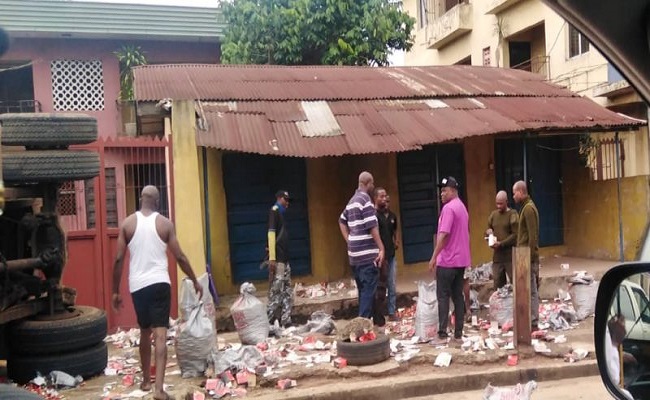 Onitsha residents are currently in fear, as a truck fully loaded with cartons of live bullets fell into a ditch and spilled its content all around the street, in the commercial city of Anambra State.

Nigerian Tribune learnt that the incident occurred on Sunday morning on Awka Road in the city as early worshipers made their way to churches.

The incident attracted heavy security presence to the Awka Road area and Shoprite axis of the city.

It was gathered that the truck, a Mercedes Benz 911 model was said to be moving the goods out of Onitsha to an undisclosed location when the driver lost control and the vehicle skidded off the road and fell into a gutter.

According to an eyewitness who spoke to some journalists around 6.50 am at the scene of the accident on Sunday, “the truck fell around 5 am, the driver and his conductor after sustaining minor injuries tried to evacuate and conceal the content of the truck but they could not do much before daybreak when some police operatives arrived the accident scene only to discover the truck was laden with a confinement of live bullets.”

The police subsequently called for backup and instantly arrested the truck driver while his conductor escaped.

When contacted, the State Police Public Relations Officer, DSP Ikenganya Tochukwu, said he was not aware of the incident, but promised to get back to our correspondent after confirmation.