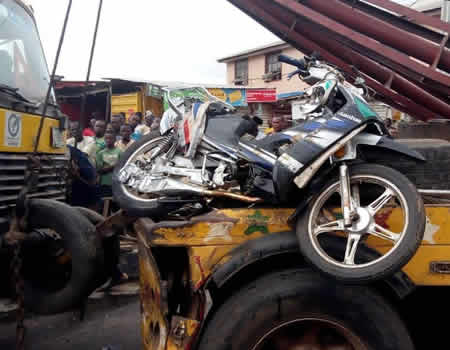 Share
A soldier identified as R.A. Nata’ala of the 35 Artillery Brigade, Alamala, Abeokuta, was on Friday afternoon, crushed to death by a truck at Iyana Mortuary area of the state capital.
The ugly incident occurred when the ill-fated truck loaded with granite lost control due to excessive speeding and overrun the victim said to be on a motorbike.

The truck marked JJJ 833 XW Mazda was reported to be coming from Ajebo road, lost control as a result of brake failure, veered off his lane and rammed into the soldier who was stopped by a traffic light.
The remains of the deceased were deposited at the morgue of the General Hospital, Ijaye, while the truck was towed away to a nearby police station.
The driver of the truck had been arrested and taken away to Divisional Police Station, Kemta, Idi -Aba.
The Traffic Compliance and Enforcement of Corps (TRACE) enjoined drivers of articulated vehicles to always put their vehicles in good condition as well as ensuring that they are mentally, physically, emotionally and psychologically stable before proceeding on any journey.

Omo-Agege doles out 8 cars, 45 tricycles, other items to constituency members