Arts and Reviews
By Azeez Afees Aderibigbe On Aug 4, 2021 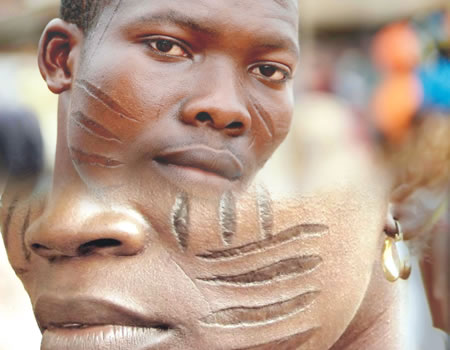 Tribal marks are noticeable markings on the body, particularly on the face, by which a person may be recognised, while culture is the value, practice, symbol, institution and human relationship that a given society has.

Tribal mark or scarification of human skin is a cultural heritage which has played significant role in the cultural consciousness of a society. .

It is believed that tribal marks came into existence in Nigeria during the colonial era when people were being captured and taken into slavery, so members of the society began giving their family members marks for identification or recognition if peradventure they were captured.

Tribal marks are usually permanent on the faces of the bearer; it is a way of identification which has been passed down from family, community and royal lineage. It also functions to differentiate one ethnic group from another.

There are marks on the cheeks, forehead, on the temple, that is, under the chin, among other areas. Some of these marks vertical lines, horizontal, both vertical and horizontal.

The Yoruba, for example, have different patterns of tribal marks and names like Keke, Abaja, Gombo, Baamu, Pele, to mention a few.

The Hausa also have names for tribal marks like Zube; they also make incisions on children’s faces or bodies to treat ailment like convulsion, pneumonia and measles.

However, of late, this practice seems to be fading and there are so many factors responsible for it, including civilisation, fear of HIV/AIDS, as using the same blade to cut the faces of many people helps in the spread of HIV\AIDS.

Social factors are also responsible for why the practice of marking people is fading. It is not uncommon to hear people refer to an individual who wears tribal marks as ‘Colonel,’ due to the stripes on their faces.

Reasons for facial markings are, however, diverse, and it includes for legitimacy, identification, patriotism, spiritual or religious practice, treatment of illness, among others.

Aderibigbe is of the National Museum, Ile-Ife.

Omotara: A don tells the story of his life