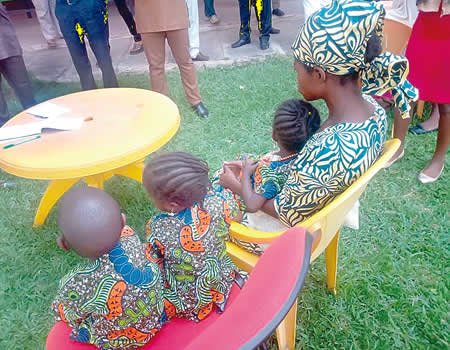 Stunting among children in the South-West region of Nigeria has risen, second only to the northern region. And the problems seem to have eluded the majority of the people, writes SAM NWAOKO.

The three-year-old twin girls had sauntered into the event hall, with one of them tugging at the colourful beads that had adorned her neck. The more active of the twins exhibited excitement and had all the trappings of a happy child. But the experts in the hall knew that the twins were malnourished while the media personnel wanted to know how and why.

The elder brother of the twin girls, Taye and Kehinde, is nine-year-old Saad. He was more composed; and in his composed nature, his curiosity was palpable. Saad wasn’t really willing to tell of himself, even as his mother almost constantly prodded him to speak. He was really shy in the company of the strange people, a sign the belied his small looks but which also betrayed his maturity. Saad’s mien was the exact opposite of his vivacious twin sisters.

The children, from one of the local government areas of Oyo State that is synonymous with food production, the experts said, were malnourished and are currently undergoing a nutritional therapy at the Oni Memorial Children’s Hospital in Ibadan, the Oyo State capital.

Their 30-year-old mother, Abisola, said she was made to realise that something was wrong but appeared helpless. She said her husband and father of the three children was an orange merchant. “His business? He buys oranges from farms in Iseyin and ships them to Lagos for sale. That’s the job he does,” explained Abisola, saying her husband, being an itinerant trader was just as helpless because, according to her, “business isn’t always good.”

Abisola told newsmen that officials of the Oyo State Ministry of Health saw her children and just took her up on their feeding and nutrition. “They asked me about what I feed them and sundry enquiries. I told them it was Àmàlà (a common staple food among the Yoruba). They told that the children were unhealthy and that something must be done quickly,” she stated.

Dr. Khadijat Alarape of the Oyo State Ministry of Health said that the three children were moderate acute malnutrition (MaMa), but she didn’t fail to stress the fact that their malnourishment was of serious health concern because their inadequate nutrition has already given signs of their stunting.

In another corner, in the arms of her grandmother was nine-month-old Lateefat. She gives an occasional shrill cry of distress that gave one the impression that she was a neo-natal. But Lateefat, said to have been born by an ailing mother was left in the care of a grandmother that literally didn’t care about her nutrition. The grandmother said Lateefat was fed with pap, and still wondered why the child was obviously malnourished.

However, the intervention of officials of the Oyo State Ministry of Health has saved Lateefat, as she has been snatched from within the whiskers of death and, or ‘wasting’, a situation nutrition experts said was “a death sentence”. Dr Alarape said Lateefat was suffering from severe acute malnutrition (SAM) and that she was placed on a special diet called S-75, a formula from experts supported by the United Nations Children’s Fund, UNICEF.

The children highlighted above were not found in a war situation but in South West Nigeria, a region with acclaimed high level of education and enlightenment in the country. They are part of the over 1.5 million under-five children in the South West that are currently suffering from stunting, which UNICEF Nutrition Specialist, Akure Office, Mrs Ada Ezeogu, said had become a health concern, going by their high percentage.

UNICEF raised the alarm at a recent two-day Media Dialogue on Child Nutrition, held in Oyo State because the statistics are grim. Mrs Ezeogu revealed that 19.4 per cent of children in the South West of Nigeria are suffering from stunting, saying “this is worse than the South East and South South but better than the North for obvious reasons.”

Ezeogu described stunting as a failure to achieve one’s own genetic potentials and severe, irreversible physical and cognitive damage caused by early chronic malnutrition, has myriads of negative implications on the nation’s economy and other facets of life.

According to her, 43.6 per cent of the estimated 40 million Nigerian children under the age of five, from Nigeria’s estimated population of 197million are suffering from stunting. This means that an estimated 37 million children in Nigeria under age five, have their bodies and minds limited by stunting.

She lamented that the effects of stunting could not be quantified in material terms and called for urgent action by government and policy makers.

Part of the things required to arrest this trend, is education nd enlightenment, which UNICEF had helped in doing by bringing the media into the mix. The UNICEF Communication Officer, Lagos, Blessing Ejiofor, said the media dialogue which was a collaboration with the Ogun State’s Ministry of Information and Strategy, was a proactive partnership with journalists to sensitise the general public on causes and solutions to the menace.

Ejiofor, who reiterated that adequate nutrition was the right of every child, also harped on increased reportage on child malnutrition with a focus to stimulate increased government funding as well as implementing policies to reduce the rate of stunting in the South West region.

Part of the things expected of the governments in the region include increased enlightenment on the need for adequate nutrition for women of child-bearing age, exclusive breast-feeding of infants for six months and nutritious supplementary feeding for the children, so as to arrest the scourge of stunting in the region.

In Ijebu-Mushin, foundation gives succor to the visually-impaired