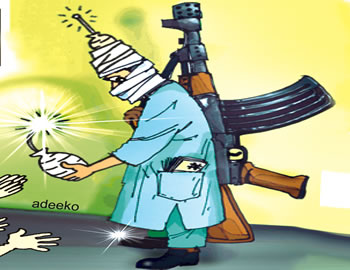 RECENTLY, members of the Boko Haram sect launched an attack on troops of the Nigerian Army’s 157 Task Force Battalion in Metele, Borno State, killing scores of soldiers and wounding just as many. Sadly, military rescuers who landed in Metele to evacuate the bodies of their soldiers colleagues were reportedly killed in another Boko Haram ambush. While initial reports citing military sources put the casualty figure at over 100 soldiers, the Chief of Army Staff, Lieutenant-General Tukur Buratai, speaking at the 2018 Chief of Army Staff Annual Conference in Maiduguri, Borno State, stated that 23 personnel were killed, while 31 were wounded. According to him, the 157 Task Force Battalion is part of the Multi-National Joint Task Force (MNJTF) contingent deployed against Boko Haram and headquartered in N’djamena, Republic of Chad. Buratai promised that all necessary support would be given to the MNJTF to reverse Boko Haram’s resurgence.

In his own reaction which came only after relentless criticism of his silence on the matter, President Muhammadu Buhari said his administration was committed to the security of military personnel and other citizens, and would provide the needed support to troops fighting terrorists. In his words: “No responsible Commander-in-Chief would rest on his oars or fold his hands to allow terrorists to endanger the lives of military personnel and other citizens. Our loyal forces have proved their strength over the terrorists and we are ready to give them all the needed support in terms of equipment and manpower to succeed in ending the renewed threat. In the coming days, I am engaging the military and intelligence chiefs in extensive discussions on the next steps we shall be taking.” He did not fail to remind Nigerians not to make  “political capital out of a national tragedy.”

Although the Metele tragedy has pitched the Buhari administration against the opposition and blames are being traded almost on a daily basis, the major issue raised by the Metele tragedy has yet to be made a critical point of national discourse. The point has been made that the administration intends to release $1 billion from the Excess Crude Account (ECA) for the procurement of arms to prosecute the war against terror, while attention has also been drawn to the lamentations by grieving soldiers who survived the Metele ambush. Among other things, the soldiers exposed the rotting underbelly of military operations in the North-East, including the deployment of obsolete equipment and the insincerity of the military high command. However, while we believe that these and many other issues need to be addressed, we are of the view that the fundamental lesson of the attack in Metele is that the counter-terrorism operation in the North-East is basically flawed if not a hoax. The attack portrayed the Nigerian military as hopelessly and horrendously flawed from a tactical perspective. Pray, how could the military have been caught unawares in such a fashion as it was? The implication is that the army was not tactically and strategically ready. To be sure, the war in the North-East is unconventional and would thus require  different strategies from those deployed in conventional warfare. But tactical readiness is a crucial ingredient of all wars. The military having been on ground in the North-East for years, it amounts to tactical failure for soldiers to be taken completely unaware. How does Boko Haram chance upon the military just like that?

In case the government has not realised it, it has a lot to explain to Nigerians. On their part, Nigerians must demand answers to the critical questions thrown up by the counter-terrorism operation in the North-East. The government must stop mouthing the regular platitudes about Boko Haram coming into the country from Chad or Niger Republic. This is no news and the populace is tired of it. Boko Haram can come from anywhere, but a tactically ready military would always be on alert to take the battle to it any time and any day. If terrorists can invade and overrun a military base in rather cavalier fashion, even telling the soldiers that they are zombies who would obey any directive that their commanders issue to them, then the entire operation theatre command in the zone faces integrity questions and must be overhauled to avert greater tragedy.

If the international Joint Task Force is not living up to billing, it is time to either rejig it or fashion another operation that is fit for purpose. For some time now, the government  has been celebrating what it calls the degrading of Boko Haram. Time and again, Nigerians have been bombarded with the claim that Boko Haram has been “technically defeated.” It has thus given Nigerians a false sense of security. This amounts effectively to an abdication of constitutional duties. The government is in place to protect Nigerians, not to deceive them and put their lives in peril. Against this backdrop, it must begin to put Nigerians in the true picture of things. Endless promises of more materials and manpower won’t cut it. If it fails to act decisively now, the country will suffer dire consequences.