•Title strange to our culture, communities 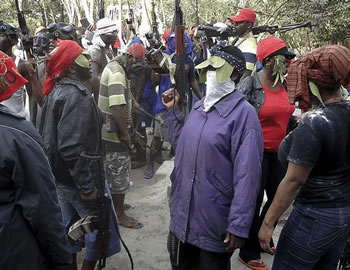 Palpable tension on Wednesday engulfed the nine communities making up the Egbema Ijaw Clan of Edo and Delta States, as Mr Henry Binidodougha, declared himself the traditional ruler of the oil-producing communities hosting the multinational, Chevron Nigeria Limited.

Binidodougha, who took the title, Ojuaga of the clan, was, however, disclaimed by the communities, which directed the multinational oil giant, government agencies, communities and traditional institutions and the public not to deal with the ex-militant commander as the traditional ruler of the area.

The communities said that the title of Ojuaga 1 which the self-acclaimed ex-militant gave to himself was an aberration, unknown to the traditional institution, maintaining that Binidodougha was not installed as the king by the clan.

They stressed that the ex-militant could not have been king, having not being from any of the existing ruling families in the land.

“The title of Ojuaga I, is alien and repugnant to the customs and traditions of the ancient Kingdom of Egbema. For the records, Mr Henry Binidodougha will never be enthroned as a traditional ruler of Egbema Kingdom because he is not from any of the ruling houses in the Egbema Kingdom gazetted with reference no. B. S. L. N. 148 of 1979 upon the approval given by the then military administrator of the defunct Bendel State of Nigeria.

“Members of the general public, particularly governmental agencies and neighbouring kingdoms are, therefore, urged to refrain from having any dealings with the said Mr Henry Binidodougha and his followers in relation to the ancient Egbema Traditional Stool.” The statement read in part.

The Egbema Traditional Council called on members of the neighbouring communities to avoid the impostor and urged all sons and daughters of the kingdom to be on the alert in the face of the grave assault on their traditional institution.