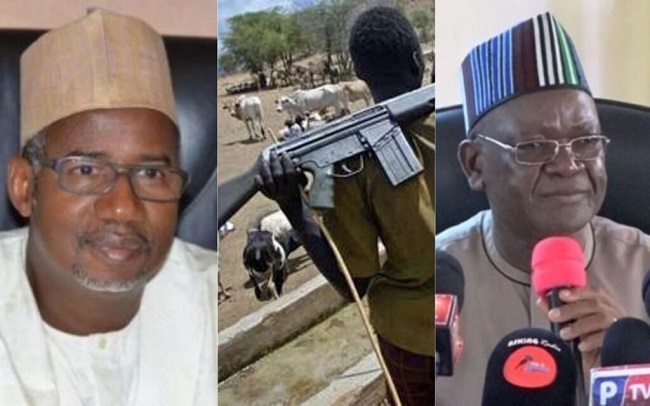 Governor Samuel Ortom of Benue State on Friday called on his counterpart in Bauchi State, Bala Mohammed to tell Nigerians, the section of the nation’s constitution that permits Herdsmen to carry AK-47 guns.

Governor Ortom made the call while reacting to the Bauchi State Governor’s statement in his keynote address in Bauchi on Thursday.

The Bauchi State Governor, Bala Mohammed had in his keynote address took a swipe on his Benue counterpart as the first leader in the country to initiate hatred against Herdsmen.

But Ortom who spoke through his Chief Press Secretary, Terver Akase expressed shock and disappointment in his Bauchi counterpart for submitting that Herdsmen had no option but to carry AK-47.

Ortom said with such unguided utterances from a governor, Mohammed had jettisoned the oath of office he was sworn in to uphold and had taken the lead in violating the provision of the constitution just as he said his statement submission amounted to call for lawlessness.

According to Ortom, “the most shocking part of Governor Bala Mohammed’s statement was where he defended herdsmen for bearing arms saying “they have no option than to carry AK47 because the society and the government are not protecting them.”

Ortom added, “It is shocking that a colleague who took the oath of office as I also did, to protect and preserve the Constitution of the Federal Republic of Nigeria, now takes the lead in violating provisions of the same constitution by calling for lawlessness.

“And the most shocking part of Governor Bala Mohammed’s statement was where he defended herdsmen for bearing arms saying “they have no option than to carry AK47 because the society and the government are not protecting them.”

“It will interest Nigerians to know from which section of the law that supports herdsmen’s free movement around the country with sophisticated weapons.

Governor Ortom reminded Nigerians of what his colleague, Mohammed once said on national television that a Fulani man is a global citizen and therefore does not need a visa to come to Nigeria and that the forests belong to herdsmen.

Responding to Governor Bala Mohammed’s comment that there are Benue people who are freely doing business in Bauchi and elsewhere, Governor Ortom stated that Benue indigenes in Bauchi have been law-abiding and do not carry arms to attack their hosts.

He further said that Fulani, as well as many other Nigerians residing in Benue who respect laws of the land, also live peacefully with their hosts.

Governor Ortom said his administration has not driven away any law-abiding Nigerian in Benue State.

The Governor said he found it unfortunate that those who are trusted with the people’s mandate and should ordinarily uphold truth and justice have chosen to mislead the country.

He stressed the need for leaders to be cautious and retrace their steps which are capable of leading the country to anarchy.

The surprise visit made on Friday night by the leaders of the ruling All Progressives Congress (APC) to former President Goodluck Jonathan at his residence in Abuja triggered a stir in the major political camps, resulting in at least four possible theories..Tell Nigerians section  Tell Nigerians section

NDDC duped us over the ‘Mother and Child’ hospital ― Wike