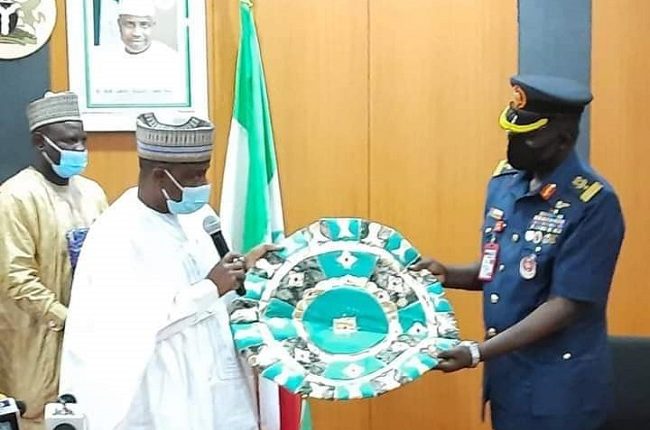 Governor Aminu Waziri Tambuwal of Sokoto State has tasked the Nigeria Defense College (NDC), Abuja, to commence an in-depth study into the causes of banditry which has caused the state a lot of anguish in the past and recent times.

This is according to a press statement from the media aide to Governor Muhammad Bello, who disclosed that Tambuwal gave the NDC the charge Monday when some staff of the college who led participants of its Course 29 on a study tour to the state paid him a courtesy visit at Government House, Sokoto.

According to Tambuwal, his administration has “…candid interest in the college and would like to partner with it by providing full sponsorship for it, “to undertake a study on the causes of banditry and kidnapping in Sokoto state.

“Let us have recommendations on how to forestall future occurrences of this menace. We believe the partnership will not only give us the historical evolution of these criminal activities but with the help and outcome of that study, we should be able to now prevent future occurrences,” he added.

He further added that the duo of the problems has “caused us a lot in terms of human lives, property and loss of confidence in our security agencies in the state; which is very monumental.”

He said: “I believe that we should not fold our arms and allow that to happen in the future even if we are not here as leaders of the state,” pledging that his administration will  implement the recommendations of the study because NDC “is one of the foremost think tanks in terms of security and defence.”

In his remarks, the NDC’s Director of National and Military Strategy (DNMS) and leader of the college’s Team Four on a study to Sokoto state, Air Commodore Dauda Garba Prayero, said participants at the college had over the years undertook study tours within and outside Nigeria in order to assess contemporary issues affecting national and international security and development.

Air Commodore Prayero added that  97 participants are presently undergoing the course at the college. These comprise 82 Nigerians and 15 international participants.

He said the objectives of the tour is to generate and interrogate viable ideas of promoting science and technology for the fourth industrial revolution.

The team leader also explained that Sokoto State was selected as a result of its giant strides in the educational sector, thus commending the governor for executing various projects geared towards developing education in the state.