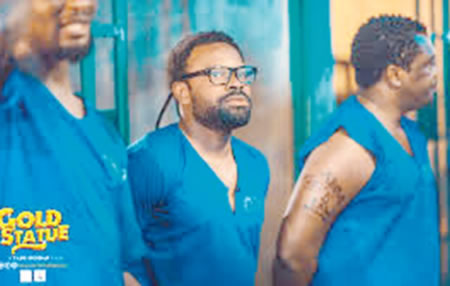 TADE Ogidan is one of the big masquerades of the Nigerian movie industry, who do not come to town regularly, but whenever he comes, he dances well to the delight of his teeming fans.

It is therefore not surprising that the filmmaker, renowned for quality has done same again with his recently released comedy drama, Gold Statue.

The flick features Gabriel Afolayan, who plays Adewale Esho, the son of Richard Mofe Damijo (RMD) and Sola Shobowale, named Akintade and Grace Esho respectively.   They are a comfortable middle-class family based in Lagos.

Their son, Adewale later hears in school about a gigantic gold statue in the city of Ilesha, which happens to be his home town. From his findings, it is part of his ancestral rights. He researches the location of the statue through his Grandfather and a friend abroad. Though Grandpa declines to divulge the information, his friend tells him, and the journey begins to get this goldmine.

As a young man who has just left school, he is able to leave home on the pretext of going for his National Youth Service Corps in Adamawa State, but he finds his way back to Ilesha. After a series of activities, he lands in jail. As the Yoruba saying goes, “Oruko to ba wu ni laa je leyin odi” meaning you can bear any name of choice outside your town, he changes his name to Samuel Okon but is seen in prison by someone who could identify him.

Adewale’s imprisonment almost tears the family apart with his mother having to relocate to the family house in Ilesha to ensure that he is fine. Eventually, the smart young man becomes a force to reckon with in prison. After that, he is able to recruit fellow prisoners for the task of stealing the gold statue.

Apart from the trio of RMD, Afolayan and Shobowale, other A-list actors in the movie including Alli Baba, Norbert Young, Woli Arole, Yemi Sodimu, Segun Arinze and D-Banj gave it life. Equally, contemporary songs were used effectively to engage the audience.  Tade Ogidan has been described as the Quentin Tarantino of Nigerian filmmaking, and this new flick appears to confirm that rating.

Anyway, questions that viewers will find answers to in the movie that opened in cinemas on May 17 include the outcome of the desperate search for the gold statue and the eventual beneficiaries.