Succour as sickle cell patient, 7 others benefit from open-heart surgery in OAUTHC 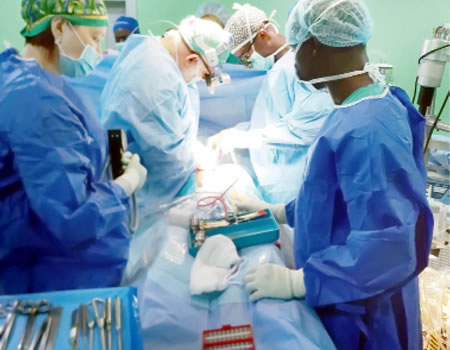 In Nigeria, almost 60,000 children are born every year with heart diseases. Now, experts in this report by Sade Oguntola, help awaits such children in many Nigerian hospitals, including the Obafemi Awolowo University Teaching Hospital Complex, Ile Ife.

Araoluwa, a 10-month-old baby was diagnosed with a hole in her heart at two months when she developed catarrh and the parents took her to Ekiti State Teaching Hospital.

“It was catarrh that made us take her to the hospital, but the doctor who examined her said there was some murmuring in her breathing,” said Araoluwa’s mother.

The mother had also noticed her profuse sweating each time she was breastfeeding and her subsequent weakness. Although she was eating well, she assumed that her little girl overtime would get over all these challenges.

The scan at Obafemi Awolowo University Teaching Hospital Complex (OAUTHC), Ile-Ife, Osun State, where the baby was referred for treatment confirmed that Araoluwa’s small size for age, catarrh and her ‘murmuring’ breathing was because of a hole in her heart.

For three-year-old Kehinde living with sickle cell disease, the three holes in her heart had made  her underweight. Her twin was about one and a half her size. Without the repair of her heart, her chances of living till old age was slim.

These are among the eight whose hearts were repaired over a week at the OAUTHC,  for different heart problems, including holes in the heart and bad heart valves.

The hospital which commenced subsidised heart surgery in 2016, has carried out about 120 close heart and open heart repair surgeries. One was on a baby who had a wrongly connected heart-transposition of the great arteries. This was the first case of such a heart repair in West Africa.

The large vessels that carry blood from his heart to the lungs and to the body were improperly connected. Essentially, the connections in the heart were “swapped” or switched (transposed).

In Nigeria, almost 60,000 children are born every year with heart diseases. Unfortunately, a large number of them are dying because not much is being done to treat them.

Dr Onakpoya stated that at OAUTHC, Ile Ife, it was always a pleasure to help repair such heart problems given the plight of the affected children and their parents.

”What the hospital offers is a much-subsidised heart surgery to encourage more children who have heart diseases to be able to access healthcare. We have had quite a number of interesting cases.

“We had a child on this list whose parents in preparing for this surgery, were duped of their money. They have gone through emotional pains all in trying to raise funds,” he added.

Dr Onakpoya said that congenital heart diseases are diverse and as such the extent of heart repair one child will require, including its cost, will not be the same required by another child.

According to him, “One of the cases we did on last Thursday had a hole in the lower chamber of the heart. Meanwhile, the previous day, we had operated a three-year-old child with sickle cell disease anaemia with three holes in the heart. We are able to close all of these holes.”

Its signs and symptoms depend on the specific type and severity of the defect. Symptoms frequently manifest early in life, but it is possible for some congenital heart defects to go undetected throughout life.

Dr Onakpoya, however, cautioned that all cases of congenital heart defect need to be treated as early as possible because they  could impede a child’s timely attainment of his developmental mile stones.

“But once this is repaired, they quickly catch up with their growth because they will eat better. In the past with the congenital heart disease, when they tried to eat, it was like work for them; it was laborious.”

Frequent cases of catarrh as experienced by Baby Araoluwa are linked by Dr Onakpoya with their increased risk for respiratory tract infections like pneumonia.

According to him, pneumonia occurs often in children with congenital heart disease and the reason they are brought frequently to the hospital.

The surgeon said without these defective hearts being corrected, such children probably may not live up to the age of 20 and even if he does, he will be frequently in and out of the hospital.

“They stand a higher risk of developing many problems, including brain abscesses, heart attacks, heart failures, slower growth and development and even stroke,” he declared.

The Chief Medical Director, OAUTHC, Ile Ife, Professor Victor Adetiloye, said the hospital’s cardiac centre building would be completed before the end of December to further strengthen its care and treatment of heart problems.

Professor Adetiloye said the plan was to ensure that the hospital can undertake open heart surgery every day when the cardiac centre becomes fully functional.

He added: “it will solve the problem of Intensive Care Unit space and sharing theatre room. For the past one week, other subspecialties that use where the open heart surgery is being carried out have not been able to operate.”

According to Professor Adetiloye, this one-stop cardiac centre will also house facilities for radiology services such as CT scan and ultrasound, laboratories, cart lab, clinics as well as wards for patients with heart problems.

The CMD, who described the hospital’s cardiac team as a committed set, said the hospital now has three cardiothoracic surgeons that can carry out open-heart surgeries, two perfusionists, many theatre nurses as well as an anesthesiologist with a bias for cardiac surgery.

“We are making more diagnosis of congenital heart disease more than ever before, that is why it appears as if they are new. They have always been there; some of them die quietly at home,” he added.

Currently, Professor Adetiloye said OAUTHC, Ile-Ife is leading other public hospitals in the number of open-heart surgeries it has done consistently since 2016.

The don, who stated that OAUTHC, Ile Ife could be designated a centre of excellence for cardiac care, said doing so will also require that it is adequately equipped and funded to ensure more Nigerians have access to high-quality treatment and care for heart problems.

He said training of health personnel to ensure optimal heart treatment and care is also pivotal for such a centre of excellence for cardiac care.

“As we bring in new facilities, training must go with them. Nigerians need not go on medical tourism with what we have been able to achieve in the last two and a half years

“Our surgeons have consistently been doing all the open-heart surgery. We only reserve those ones that are so complicated for the time when our partners come,” Professor Adetiloye said.

Can you lose your eyesight from crying?