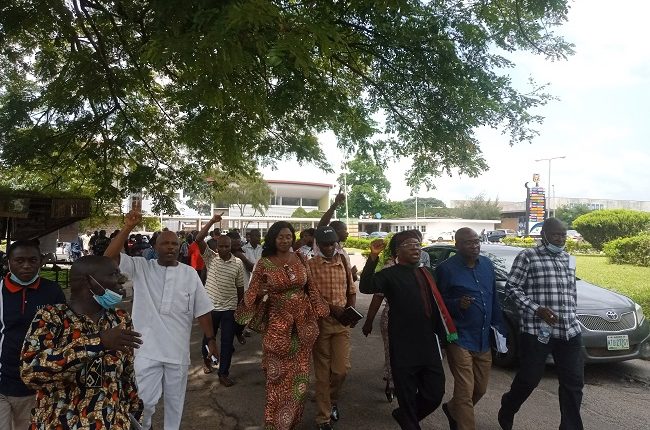 Non-teaching staff of the University of Ibadan, on Thursday, began a series of protests over lopsidedness in the template of the federal government for the sharing of the about-to-be-released tranche of the 2021 earned allowances.

Under the auspices of the Non-Academic Staff Union (NASU) and Senior Staff Union of Nigerian Universities (SSANU), the staff who held a protest march to the school’s main gate vowed to sustain the protests until the federal government reviews the sharing formula for the earned allowances.

Rendering various Aluta songs, the non-teaching staff led by Chairman, SSANU, Mr Abiodun Omisore, and his NASU counterpart, Mr Malachy Etim, rejected the sharing template where they are to get 25 percent of the earned allowances while their teaching counterparts, Academic Staff Union of Universities (ASUU) will get 75 percent.

Speaking on behalf of the unions, Omisore accused the federal government of consistently skewing the payment of earned allowances in favour of ASUU.

Throwing back to the history of payment of earned allowances, Omisore said that in 2017, out of N23billion allocated, 89 percent was allotted to ASUU and 11 percent to non-teaching unions.

A similar scenario, Omisore noted, played out in 2019, when out of N25billion allocated, 80percent was allotted to ASUU while non-teaching unions got the remainder of 20 percent. 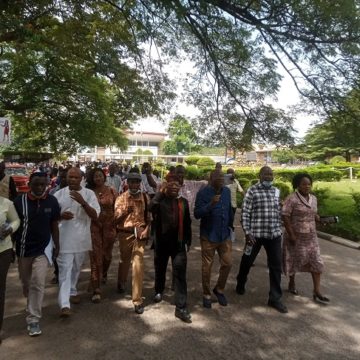 When the scenario played out in 2019, he reported that government promised to address the perceived lopsidedness in the following year’s supplementary budget.

Omisore said the non-teaching staff unions demanded fairness arguing that the earned allowances were actually included in the supplementary budget so as to address payment gaps and inadequacies relating to non-teaching members of staff of the universities.

Omisore tasked the federal government to ensure evenness in the sharing of the allowances, vowing to resist what they called an “ungodly, unwholesome and obnoxious sharing formula that will not be premised on principles of fair play, common sense and good neighbourliness.”

Omisore added, “While the government has been severally accused of irregular and or fractional payment of these allowances, of particular worry is the fact that government has been biased in payments, as payments most times have been skewed in favour of ASUU.

“It is also apposite to note that in 2019, when this awry and sinful situation played out and the non-teaching unions engaged government. The government, surprisingly, realizing that it had erred promised that the concern of the unions would be addressed in the following year’s supplementary budget. Two years down the lane, in the year 2021, the government again has been arm-twisted and perfected arrangements to shortchange the non-teaching members of the universities in the sharing formula of the Earned Allowances.

“While the non-teaching unions are not pointedly engaging ASUU or scrambling for equality, but sanity demands that there should be fairness and Godliness in the Nigerian university system. We should be reminded that the earned allowances included in the supplementary budget was basically to address the payment gaps and inadequacies appertaining to the non-teaching members in the Nigerian universities.

“As non-teaching members of staff, University of Ibadan branch, in the parlance of the Boys Brigade, we are more than prepared to resist with every strength we possess, any ungodly, unwholesome and or obnoxious sharing formula that will not be premised on principles of fair play, common sense and good neighbourliness.

“Consequently, we request without any equivocation, that the federal government should reverse itself and attempt (if only for the first time), to be even-handed in the sharing of the about-to-be-released tranche of the 2021 earned allowances.”

Furthermore, Omisore pointed to the fact that the national leadership of the unions signed a Memorandum of Understanding (MoU) with the federal government in February to address issues of inconsistency in the IPPIS payments, nonpayment of earned allowances, non-payment of arrears of minimum wage, delay in the renegotiation of FGN/NASU and SSANU 2009 agreements, non-payment of retirement benefits of outgone members among others.

He decried that 90 percent of the February MoU had not been addressed by the government, urging the government to honour and implement the aspect of earned allowances to its members.