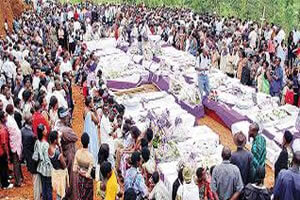 More controversies have trailed the recent attacks on some communities in the Southern Kaduna area of Kaduna State, with the Kano and Kaduna states’ chapters of the Christian Association of Nigeria (CAN) faulting the responses of the Federal Government to the situation.

This was just as the Kaduna chapter of the association insisted that more than 800 people had been killed in the attacks in three local government areas in Southern Kaduna, contrary to a statement by the National Emergency Management Agency (NEMA) that only 204 people lost their lives.

The secretary of the association in the state, Mr Sunday Ibrahim, on Saturday, remarked that the Christian body was not comfortable with NEMA’s figure.

NEMA’s North-West zonal co-coordinator, Alhaji Musa Illa, had said that from the agency’s record, only 204 were killed.

But CAN countered saying: “We still stand by our figure that over 800 people were killed in Southern Kaduna.”

Elsewhere, the chairman of the body in Kano State, Bishop Ransome Bello, on Saturday, insisted that the Southern Kaduna crisis had religious and ethnic colouration.

Bello, who disclosed this while speaking with pressmen before the commencement of the annual Kano State CAN prayer week, vehemently denounced the killings in Southern Kaduna, saying: “The killings in [Southern] Kaduna were carried out by Fulani herdsmen; we all know it. If they were not religious or tribal, what are they? But till date, nobody has been arrested; no one has been prosecuted.”

Speaking on the steps taken by government to end the crisis, Ibrahim stressed: “We are beginning to see seriousness; we have seen the deployment of security operatives, as well as the coming of General Abdulsalam Abubakar’s Peace Committee.

“When every hand is on deck, we believe the crisis would come to an end. But, the constituted authorities should start direct discussion with the people with immediate effect. There must be sincerity and honesty in the discussion. Let the people see that the crisis is put to an end and that those behind it are apprehended, tried and executed,” the CAN chieftain said.

In a related development, the Founder and President of Living Faith Church Worldwide (Winners’ Chapel International), Bishop David Oyedepo, has disclaimed a report credited to him in which he allegedly charged Christians to take up arms and attack Muslims.

In a statement made available to Sunday Tribune, the church described the report in which Oyedepo allegedly  said: “If religious and ethnic injustice could not be addressed, Nigeria could as well break up,” as a fake news that was “unbelievably and maliciously fabricated.”

The church maintained that Oyedepo had not said anything related to the Southern Kaduna killings, adding that if anything had been done, “it has been prayer for peace and unity of Nigeria. The intent of the original author(s) or fabricators is best known to them.

“The fake news item, which has been trending online for a couple of days, is supposed to be a report depicting the Bishop as reacting to the crisis.

“In this report, Bishop Oyedepo purportedly called out and berated the politicians who were fun-watching while the carnage went on or fanning the embers of the violence, and supposedly noted that there was no basis for Nigeria’s continued unity.

“The report is false. The video from which the quotes were taken is a 2015 video at a Sunday service in the heat of the Boko Haram crisis, when churches, including our Northern assemblies were under frequent attacks. This was before the present administration took office. The message bears no relevance to today’s happenings; not even developments of 2016. The reporter(s), either being completely unprofessional, lazy or simply wicked, made the 2015 message look like a 2017 church service message.The trending video is NOT a 2016 or 2017 video.

“To this end, we can unequivocally and authoritatively say that this quote, the report and other similar reports do not fit the context of the Kaduna crisis or any developments whatsoever in the last one year,” the statement said.

Kaduna train attack: How leader of terrorists deceived us to release his wife, kids…