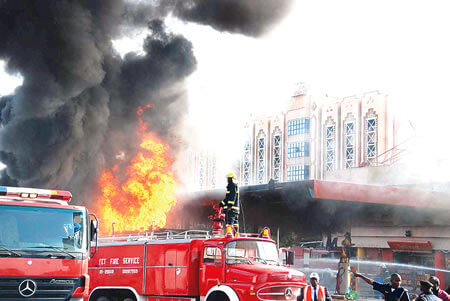 What would have been a monumental damage was quickly contained on Saturday afternoon as two shops at Bembo Elere Area of Apata, Ibadan, the Oyo State capital, were razed.

The shops, which shared the same fence with a  petrol station, were destroyed by the inferno that lasted for almost one hour before it was put out by residents of the area.

The incident, caused serious panic and confusion among many shop owners, traders and residents who feared the fire could spread to the filling station.

Sunday Tribune gathered that many residents teamed up to put out the fire before the arrival of the state fire service.

An attendant at the filling station, who did not mention his name, disclosed that the incident could have been worse if the people were not alerted.

“It happened suddenly so no one could explain the cause of the fire. But, we discovered that the shops behind our filling station had been engulfed in fire. We had to quickly use our fire extinguisher and called for another one from a nearby filling station to bring the situation under control. Men of the state fire service were also on hand to make sure the fire did not get out of hand.”

An eyewitness, who owned a bet shop beside the filling station, said no one could explain what triggered the fire.

He, however, added that the damage would have been greater if the fire was not put out early by some of the brave residents.

“It would have been a black Saturday at Apata. You can imagine a situation whereby the fire got into the filling station and sparked off. I am sure most of the cars and houses in this area would have been razed by now,” he said.

Sunday Tribune investigation revealed that the fire outbreak could not have been unconnected with the harmattan weather currently being experienced.